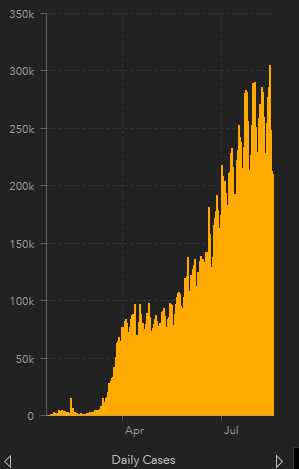 We're about to mark the 19th anniversary of that tragedy in 3 weeks and over 10,000 Americans WILL DIE between now and then.  The whole nation took action when 9/11 happened to prevent additional deaths, now we seem to have simply lost all sense of proportion in this tragedy and we've certainly lost the will to act.  We're even sending our children back to school without having taken any sort of reasonable action to keep them safe.

Of course this is a crisis of leadership, the Democrats did a good job of laying that out at their convention yet there's about 40% of this country that will never be convinced.  We've developed herd immunity to idiocy and now it washes over us like the tide – there's little we can do to stop it anymore, so we just learn to live with it.

No one is outraged, no one is doing anything about it, we just accept this incompletent Government and the deaths of our friends and neighbors as if that's just "one of those things" – even though 95% of the countries in this World have made huge progress getting their infections under control, the US, Brazil, India, Russia, South Africa, Peru, Mexico and Columbia are all now in the 500,000 case club – though none are close to America's 5.44M infections, despite India having 5 times our population. 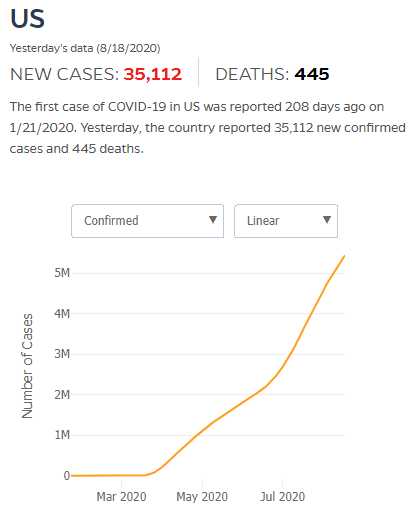 China STILL has under 90,000 cases.  They had over 80,000 back in March, when we had only 5 and, since then, they've only had 10% more cases while the US has had 100,088,000,000% more.  China was already showing the World how to contain the virus and most of the World paid attention and listened.  We essentially did the opposite and now 170,559 American's are dead and that's on this President…
END_OF_DOCUMENT_TOKEN_TO_BE_REPLACED