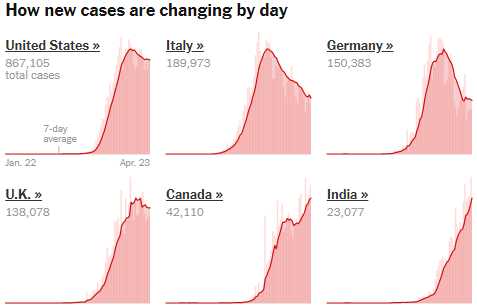 I WAS going to write an upbeat article.

Trump said that just seconds after those items were mentioned (not in the same way) by DHS's Bill Bryan (yet another Trump unconfirmed appointment) and it was very clear that Trump himself is only getting the information for the first time at the briefing and then he makes ridiculous and dangerous inferences from what he misunderstands and, because this is all being done on camera – no one has the guts to contradict him – no matter how insane his comments are.

“This notion of injecting or ingesting any type of cleansing product into the body is irresponsible and it’s dangerous," said Dr. Vin Gupta. "It’s a common method that people utilize when they want to kill themselves."

"As a global leader in health and hygiene products, we must be clear that under no circumstance should our disinfectant products be administered into the human body (through injection, ingestion or any other route)," said a spokesperson for Reckitt Benckiser, the United Kingdom-based owner of Lysol, in a statement to NBC News.

Yes, this is what America has come to.  Lysol has to issue official statements telling people not to listen to the President and inject yourself with their product.  While I certainly don't think anyone reading this is going to start shooting up Lysol just because the President said it's a promising treatment – people have died from taking hydroxyclhloroquine after the President called that a miracle cure.  It turns out to be not at all effective against Covid-19 but, to be fair, we haven't tested injecting Lysol yet – BECAUSE IT'S BAT-SHIT CRAZY!!!

Not proving something doesn't…
END_OF_DOCUMENT_TOKEN_TO_BE_REPLACED