After yesterday's wild ride, dropping 900 points and then getting 300 of them back into the close – traders are somewhat jittery this morning and, as I mentioned yesterday, we're about to get early earnings reports on Thursday and it will not be good if they disappoint.

I have pointed out on serveral occasions that the earnings don't justify these valuations so we'll be watching the Dow components very closely to see if they can justify their 29.73x p/e ratio, which is up 39% from an uninfected 21.35x one year ago.  That's nothing compared to the 39.45x the Nasdaq is trading at (27.55 last year) or the 40.40x the S&P is now at (25.53 last year). 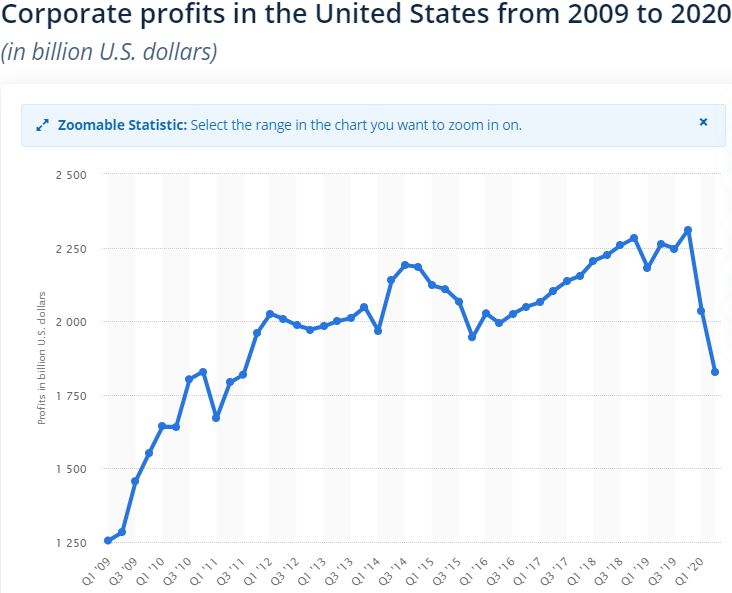 Let's assume, for a moment, that the virus is a negative or, in the very least, not a positive event.  Corporate Profits are lower than they were last year so what is the new valuation based on if not stimulus and the pace of stimulus last year was $3.3Tn direct from the Government and another $2.8Tn from the Fed – pretty much $500Bn a month to buy us that 40% increase in valuations.

Perhaps this will be the new normal and our Government will just keep pumping $500Bn/month into the economy but, even then, will earnings ever actually catch up or is it always going to be speculation that things will improve – one day?  Corporate profits were $2.3Tn in Q4 of 2019 and Q2 of 2020 came in at $1.8Tn, which were down 21.7%.  Q3, not on the chart, was worse, at $1.6Tn but estimates are we should "bounce back" in Q4.  That's already baked in – what if the market disappoints?

And, of course, even bouncing back only gets us back to about $2Tn, still around 15% below last year yet we're left paying 40% more for the same companies.  Will it never correct?  That's a pretty rough premise to hang your investing hat on, isn't it?

China has a message for companies expecting another year of stimulus to keep the lights on – "Toughen up or Prepare to Fail".  After letting inefficient firms survive for years, Beijing is now allowing them to fail. Bond defaults rose to a…
END_OF_DOCUMENT_TOKEN_TO_BE_REPLACED