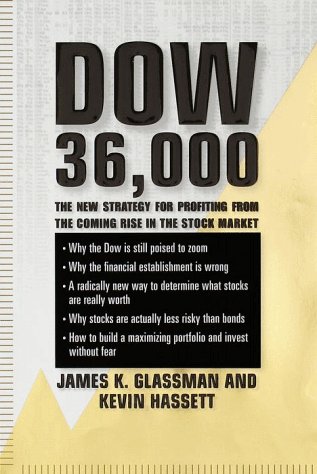 The single most important fact about stocks at the dawn of the twenty-first century: They are cheap….If you are worried about missing the market's big move upward, you will discover that it is not too late. Stocks are now in the midst of a one-time-only rise to much higher ground–to the neighborhood of 36,000 on the Dow Jones industrial average.

At the time, the book was largely discredited as misstating the risk characteristics of equity securities as equivalent to U.S. Treasury fixed income securities, it is commonly believed discredited for predicting a grossly inflated stock market.

The point is, everyone sounds like a genius when telling you to follow a trend – for as long as the trend holds out.  When the trend reverses, however, it's more like "who could have seen that coming?"  Well, rational people for one thing.  Water boils at 212 degrees and you can put water on the stimulus of a 500 degree burner and it will heat up very quickly and the trend from 180 to 200 may suggest the water will be at 280 degrees in 10 minutes but it never will be, will it?  That's because, at a certain point, Physics takes over and limitations are reached.

No matter how much stimulus you apply, you will never get the water over 212 degrees because it simply can't be water at 213 degrees.  The economy and the market may…
END_OF_DOCUMENT_TOKEN_TO_BE_REPLACED

What’s Next Wednesday – Powell Keeps it Easy but States are Raising Tax... TGIF – The Weak Ends Just in Time
Scroll to top