As Trump predicted in 2016 we are so tired of winning at this point, aren't we?  The US is clearly winning the virus race with a record 59,400 infections on Wednesday – our 5th National Record in the past 9 days – WINNING!  On Tuesday we celebrated our 3,000,000 infection in the US and we're officially at 1% of the total population infected so that's 1/100 people carrying the virus (that we know of without adequate testing - which the President says causes more cases) and it remains airborne so see how well you do today avoiding coming in contact with 100 people or things that have been touched by 100 people….

There is a certain logic to "getting it over with" – they probably can't stop it from spreading, there is no miracle cure and we're all going to get it eventually so why prolong the agony?  Well, one reason is that hospitals are out of room for new patients and also out of supplies which means the virus can spread out of control when we try to treat infected people and more infected people means less room and less supplies and that will cause more people to die and not just from the virus but hospital staff is pulled away from other duties as well – endangering non-Covid patients. 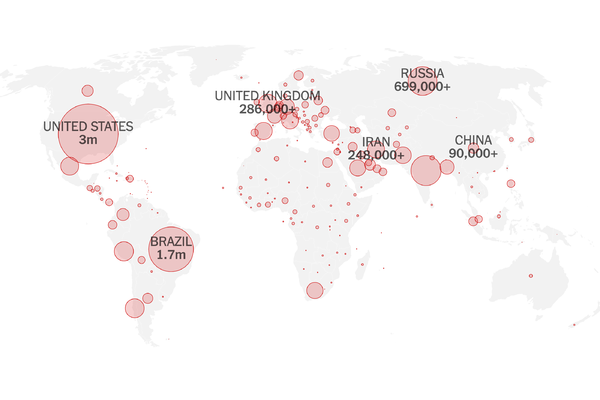 That is why we need to "flatten the curve".  The US already has one of the worst-performing Health Care systems in the World and this is a stress test we are clearly failing.  “It’s been chaos for us,” said Randy Bury, President of the Good Samaritan Society, which has struggled to keep its 200 nursing homes supplied with hand sanitizer, masks and gowns. “The supply chain in the United States is not healthy, and we’ve learned we cannot depend on the Government.”

Trump has resisted using federal powers to address the problem, saying in March that individual governors should find their own gear because “We’re not a shipping clerk.” With the National Strategic Stockpile depleted, states have been left to fend for themselves, though the Federal Emergency Management Agency has been distributing modest shipments of gear to nursing…
END_OF_DOCUMENT_TOKEN_TO_BE_REPLACED