30,000 could happen now that we have our trade deal with China though, as you can see from the 1920s wedge (100 years ago next month!), it ain't over until the Great Gatsby sings.  Sure it's a stupid, pointless deal that has no teeth and is no better than what we had two years ago – before all the suffering – but, hey, it's a deal and, as President Trump noted in "The Art of the Deal":

"The final key to the way I promote is bravado. I play to people's fantasies. People may not always think big themselves, but they can still get very excited by those who do. That's why a little hyperbole never hurts.

So we can expect to hear that this is "The best Trade Deal Ever."  We don't actually know what it is yet and nothing has, so far, been confirmed by China so it's possible the whole thing is nothing more than a way for Trump to distract us from today's Impeachment Vote – which he thought was going to happen late last night but was rolled over to this morning – infuriating the GOP – who worked so hard to drag yesterday's session long past bed time, so most Americans would miss it. 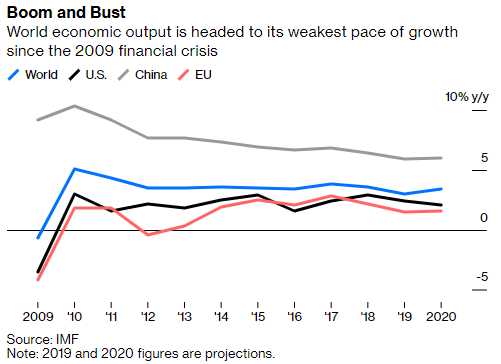 As you can see from this IMF chart, clearly the damage has already been done and hopefully we're in time to undo it before things get worse – like 2008 worse…