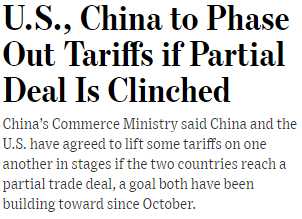 I mean WOW!  Check out the headline on the front page of today's Wall Street Journal.  Is it really "news" to say the same thing, over and over again for month after month?  I guess it is news to traders because, once again, we're up in pre-market trading.  This is just what we were talking about yesterday, MADNESS!

I guess it helps distract Conservative readers from the headline in the NY Times that says: "Impeachment Inquiry Tests Ties Between Barr and Trump" as it turns out Trump put pressure on Barr to make an official statement that his Ukraine call was "perfect" but Barr refused to say the President did not commit a crime when Trump demanded the Ukraine launch an investigation of Joe Biden and his son in exchange for the military aid Congress had already approved for our NATO allies in the Ukraine.

Mr. Trump on Thursday angrily denied a report in The Washington Post, which was confirmed by The New York Times, that he wanted Mr. Barr to hold a news conference to say that the president had broken no laws, only to be rebuffed by the attorney general.  In a Twitter post, Mr. Trump called The Post’s article “pure fiction,” adding: “We both deny this story, which they knew before they wrote it. A garbage newspaper!” Mr. Barr, however, did not publicly deny the account. 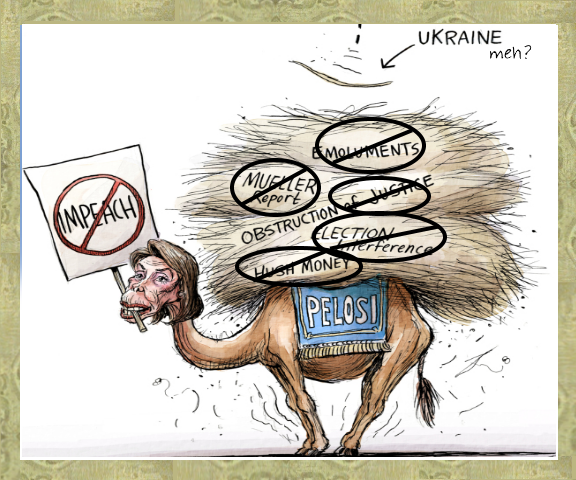 Perhaps if Trump hadn't already had Barr make a fool of himself attempting to exhonerate the President in the Meuller Report, Trump would still have some political capital to spend but the sheer volume of scandals surrounding the President makes it hard for Barr to be the point man defending every crime – lest he himself become an impeachable obstructor.

Barr is getting into hot water as he's been in the loop as half the witnesses called by the House Committee investigating the matter have refused to testify.  Failure to answer a Congressional subpeona is a jailable offense but, so far, the House is just skipping ahead to the next witness and will re-call the dodgers next week in the public hearings so they can publically defy Congress and then there will be…
END_OF_DOCUMENT_TOKEN_TO_BE_REPLACED