The Dollar is testing 94.

That's down over 1% since Sept 1st and 1.5% off it's highs so take the market "gains" with a Lot's wife-sized grain off salt since the indexes have gone nowhere for the month yet the Dollars they are priced in have lost 1% of their buying power – that's not good!

We're picking up longs on /DX off the 94 line, looking for at least a $200/contract bounce to 94.20 and, of course, keeping very tight stops below the line but 94 should be nice and bounce – even if it ultimately fails.  Brexit still isn't finished and the Trade War is far from settled (despite the relief rally on White House happy talk) so it won't take much to jam the Dollar right back to 95, which would be $1,000 per contract gains if all goes well.

Meanwhile, despite the huge boost from our weak currency, the S&P (/ES) is right where we left it at the end of August and the volume has gotten even lower by 10-15% – any lower than this and the last two guys trading can just get together in person to make their few transactions.  Professional traders do not like seeing low liquidity in the markets but it sure doesn't seem to bother the Robots and ETFs that are trading the market these days.  That's becuse people think things are great and aren't trying to sell but God help us all when they do… 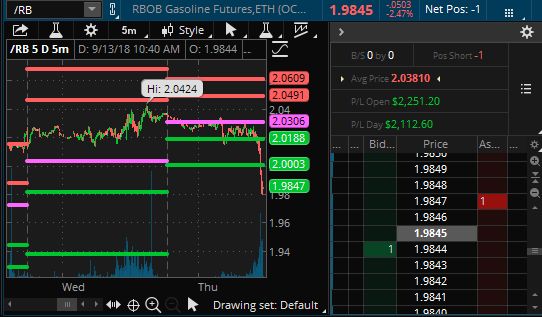 In Wednesday's Live Trading Webinar we were shorting Gasoline (/RB) Futures at $2.04 and we let one contract ride overnight and that one contract made a nice $2,112 yesterday afternoon so – you're welcome!  It's too risky to keep playing over the weekend so we'll just hope "THEY" spike it back up over the weekend so we can short it again next week.

More likely we'll switch to shorting Oil (/CL), which is still at $69