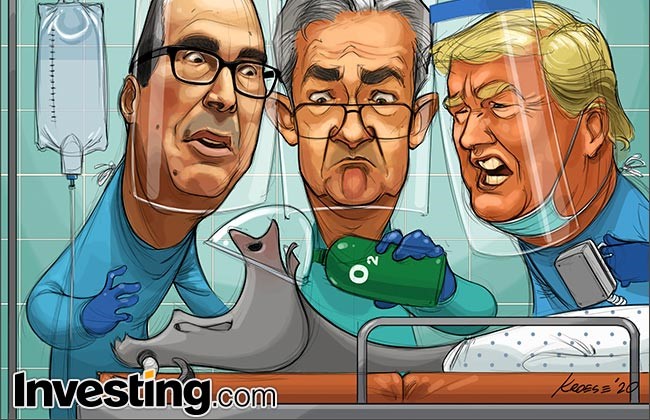 We got the Fed's mintues yesterday, they were not helpful.

“Members agreed that the ongoing public health crisis would weigh heavily on economic activity, employment and inflation in the near term and was posing considerable risks to the economic outlook over the medium term.” – FOMC

Federal Reserve officials left interest rates unchanged near zero at their July session and continued to buy Treasury and mortgage-backed bonds at a pace of about $120Bn a month.  At a press conference following the meeting, Fed Chair Jerome Powell said the path forward for the economy was “extraordinarily uncertain” and would depend on containing the virus. Results on that front have been mixed, with infections rising in several U.S. states, potentially weakening the recovery.

Officials had a long list of worries about the outlook, ranging from new waves of virus outbreak disrupting growth and crimping credit conditions, to waning fiscal support, as well as disruptions to foreign growth from the pandemic. Importantly, “several” said the long-run impact of the pandemic could result in business restructurings that may “slow the growth of the economy’s productive capacity for some time. Uncertainty is quite high. And I think uncertainty matters a lot for players in the economy and consequently for the economy itself,” said Thomas Barkin, president of the Federal Reserve Bank of Richmond.

He also said "The Fed is doing a lot to support the economy right now and we’re committed to continuing that support."  I'm sure there are some (the people you can fool ALL of the time) who will take that as a positiive sign but, as I said in yesterday's Live Trading Webinar, there's simply too many negatives to just focus on the positive in this market.  We're heading into a period of great uncertainty and the best thing we can do right now is get to CASH!!!

We went over our Long-Term Portfolio Positions and decided which ones will stay and which ones will go and we'll be taking a knife to our other portfolios as well.  We…
END_OF_DOCUMENT_TOKEN_TO_BE_REPLACED