It's not an indictment, it's just a probe but now we know why Trump wanted to fire Special Investigator Mueller the other day – apparently he wasn't loyal to Trump either and he's now officially investigating the President for the obstruction of justice the President has already bragged about when he said to the visiting Russians:

“I just fired the head of the F.B.I. He was crazy, a real nut job.  I faced great pressure because of Russia.  That’s taken off.  I’m not under investigation.”

Master.  Oh sorry, that last word might not have been a direct quote – just stating the obvious.  Well, it's not even a month later and NOW the President is under investigation and Trump himself just said that the GOP health care proposal is "mean", so that's not going to pass – especially with "more money" because the Fed just took Trump's Budget off the table with updated forecasts that indicate we'll be LUCKY to see 2% GDP growth for the rest of this decade: 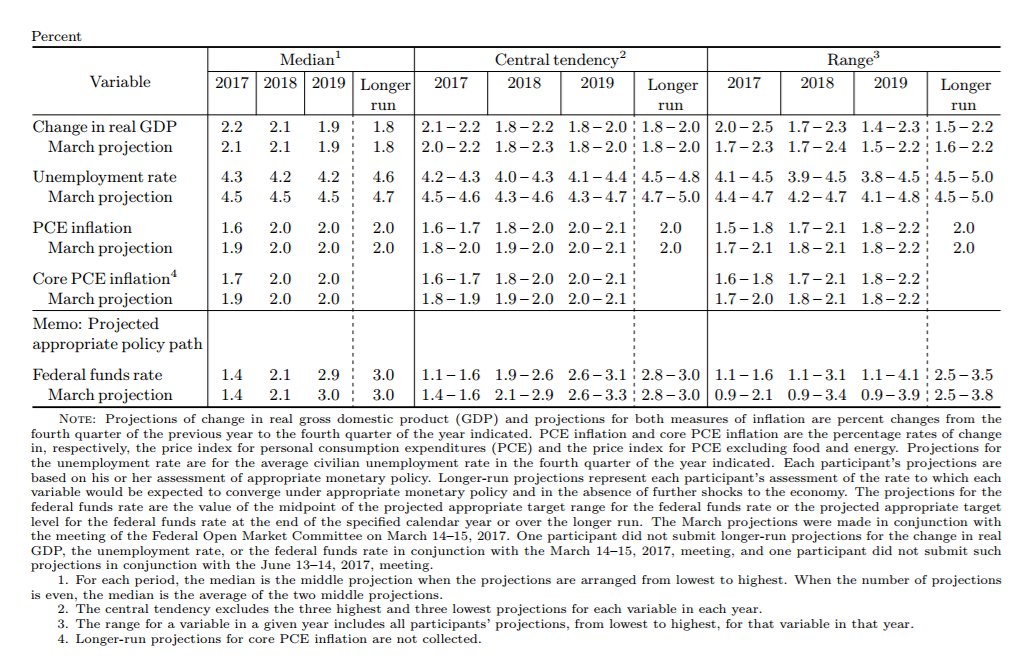 That's HALF of the Trump Budget Projections that STILL put us over $1 TRILLION in debt for each of the next 10 years AND, with the Fed on path to TRIPLE interest rates over the next 2 years, the $285Bn of interest payments we now pay will also triple to $855Bn, making interest on debt alone the most expensive line item in the budget and that's ONLY if we keep the debt down to "just" $20,000,000,000,000.00 – at Trump's projected $30Tn, our interest payments would be $1.3Tn but THAT is assuming 4% growth boosts revenues.  At 2% growth, we'd end up about $40Tn in debt paying $2.6Tn a year in interest and running a $2.5Tn annual deficit.

So either the Trump budget is dead or you should quickly make arrangements to get out of the country while you still can because, even at "just" $20Tn, your share of the National Debt is $165,897 (each taxpayer).   Of course, if you are in the Top 0.1% and making more than $3M a year, that doesn't bother…
END_OF_DOCUMENT_TOKEN_TO_BE_REPLACED

Record High Wednesday – Does the Fed Even Matter? Friday Follies – Markets Still Look Toppy to Me
Scroll to top