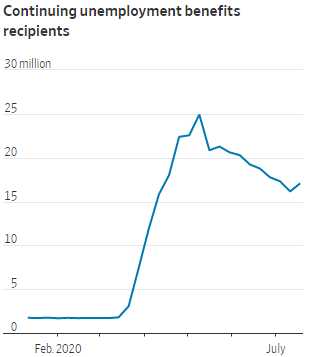 That was the most people ever laid off in a single week in the US, way back in 1982.  In March, layoffs peaked out at 6.9M in a single week and, for the month of July, they've been around 1.3M – each week – double our worst week in history 4 weeks in a row.  And this is what President Trump calls a recovery?

As you can see from the Unemployment Chart, we still have about 17M jobless Americans (officially) and it's getting worse again.  Temporarilly laid off workers went back to work but the jobs thate are being lost now are the permanent kind, due to store closing, restaurant closings, etc. – jobs that aren't going to bounce back quickly and can't be "fixed" with a small stimulus loan.

And, don't forget, the Government supplemented businesses NOT to lay off workers through July but now that those supplements have run out, a lot of companies have to make hard choices to either pay the rent or pay the workers and many are just giving up and doing neither and, when the landlords can't pay the bank – that's when the Fed leaps into action!  A good example of reality from the Wall Street Journal this morning:

Shana O’Mara has been receiving unemployment benefits since early July, after the expiration of a government loan that was sustaining her Tempe, Ariz., travel agency. She stopped drawing a salary from her business to keep it alive, but has continued to work without pay helping customers rebook and cancel trips.

She said her most recent weekly unemployment benefit payment fell to $214 after taxes, from $748 the preceding week, reflecting the July 31 expiration of an additional $600 in pretax federal benefits.  “I don’t think anyone can live on $800 a month,” she said. Her family has stopped ordering takeout, and she called her auto lender and

Will We Hold It Wednesday – Dow 27,000 Again? Friday Federal Failure – Congress Takes a 3-Day Weekend Without Fixing An...
Scroll to top