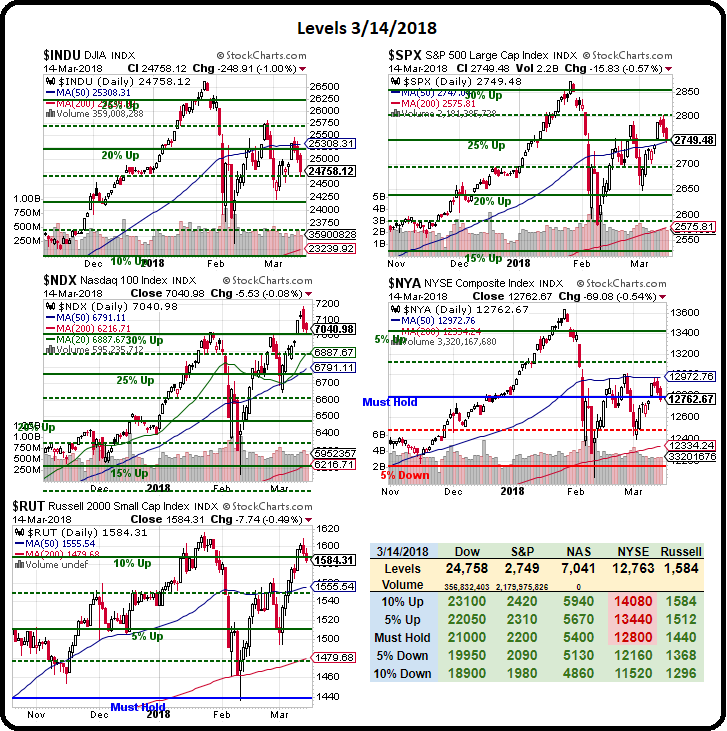 If the markets were as strong as the Wall Street narrative suggests – they wouldn't keep failing the 50-day moving averages, would they?  Not only that but we STILL haven't gotten the broadest index, the NYSE, over their Must Hold level, which means we haven't even really confirmed a broad-market rally.

Not only has the rally had a very narrow focus but, as it turns out, the main buyer of US Corporate stocks is — US Corporations!  Last week alone, US companies bought back $1.5Bn worth of stock through Bank America (BAC) alone – the biggest week they ever recorded.  In the past 3 months, $250Bn in additional buybacks have been announced, possibly pushing us to a $1Tn year in Corporate Buybacks or about 2.5% of the entire market.

And, of course, they are not buying every stock, mostly their own so it's those big, Top 1% Corporations, 90 of the 9,000 listed companies – the ones who were given $1.5Tn worth of tax breaks by the Trump Administration – that are bringing back the cash they hid overseas to avoid paying taxes under Obama (at no penalty) – and are using it to buy back their own stock to mask the fact that earings are not actually improving by reducing the number of shares those earnings are divided by.

All in all, it's just a huge Ponzi scheme where companies plow back declining profits into their own stock so the CEOs can justify their outrageous salaries and lure investors into their stock while insiders and Fund Managers (ie. "smart money") cashes out.  Then, when the whole thing ultimately collapses, they will say: "Who could have seen that coming?"

World War Wednesday – “One Does Not Give 24 Hours Notice to a Nuclear P... TGIF – Closing out a Weak Week for the Markets
Scroll to top