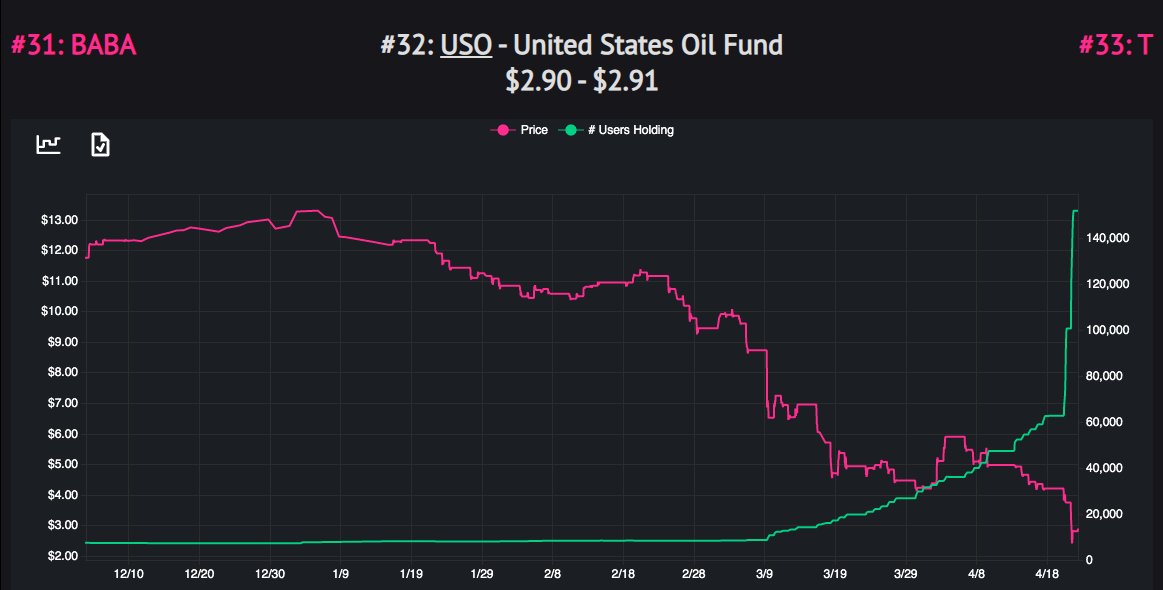 As you can see from the chart, the number of people piling into the Oil ETF (USO) is skyrocketing as the price becomes an apparent bargain, now $2.50 but the ETF is broken and now it's a chicken and egg thing as the bargain-hunters buy USO and that forces USO to buy oil contracts which has NOTHING To do with the fundamentals of oil but drives up the price of oil briefly but USO MUST dump the contracts (as they don't take delivery) by the end of the month at any price and that dump has rules and those rules can then be taken advantage of by traders who profit off the rollover.  Given the situation – I think we'll have to dump out of USO for the duration – long before the month ends.

The ETF is reverse-splitting 1 for 8 as of April 29th, so we'll have to be out by then as it's more likely than not that oil will plunge into negative numbers again at the May, taking USO down with it, no matter what price they reset it too.  So far, Trump has offered to buy 75M barrels of oil for the SPR and Trump has attempted to raise hostilities with Iran in attempts to boost the price of oil and it's working somewhat, with oil back to $15 but we just had a 25M barrel build in inventores yesterday so even if they fill the Strategic Petroleum Reserve to the brim – we still can't handle 4 more weeks of build like that!

Keep in mind the chart above represents all the storage in the US and we're only 20M barrels below the all-time high.  They may find SOME additional storage but it's doubtful they find 50M (10%) more barrels worth to take us up to 600M – there's a limit to how many broom closets refineries can fill up.  Even more immedite is the storage situation at the US's main hub in Cushing, OK, which has a very well-defined capacity of 80M barrels.

At least, that's what it says on the…
END_OF_DOCUMENT_TOKEN_TO_BE_REPLACED