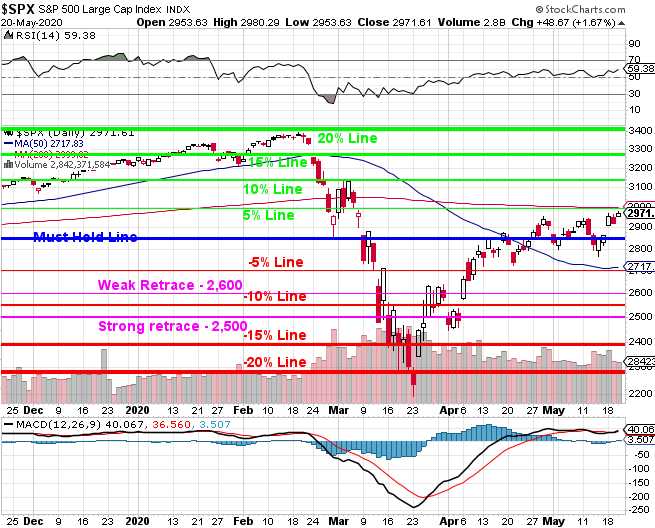 It's hard to get back over the 200-day moving average so we're not going to read too much into this early failure but it is worrying that we're heading into a 3-day weekend as tensions with China rise and the virus is raging in countries that have re-opened so that MIGHT be considered a set-back on 2 fronts that have moved the market up this year.

According to our 5% Rule™, which is NOT TA but just math, consolidating below the weak bounce line means we are more likely consolidating for a move down than up.  That would be a move down below our Must Hold Level at 2,850 and back down to test the -10% line at 2,565.  It's the same kind of bounce and weakovery that we had back in late 2018 – and we didn't need a virus then to plung 15% in 3 weeks in the second leg down.

All we've done in 2020 is double the scale but the computers are running the same algos they ran then.  A one-month drop, a 2-month recovery and then they pull the rug out again (Thanksgiving weekend) and now we're heading into Memorial Day weekend all complacent again.  I spent a lot of the Webinar yesterday warning about this so I won't re-hash it all – let's instead look at a good hedge to cover it: