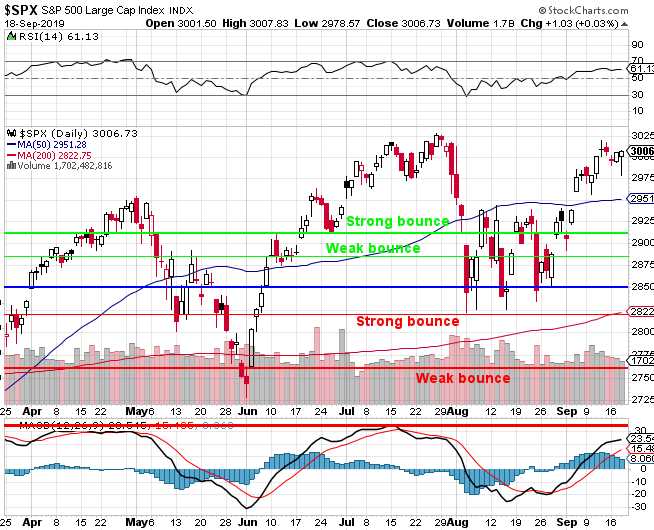 Here we are again!

As we expected, the Fed cut rates another 0.25% yesterday after changing just 15 words from their last statement, essentially indicating that Business Spending has slowed down to justify the completely unneccessary cut.  “We took this step to help keep the U.S. economy strong in the face of some notable developments and to provide insurance against ongoing risks,” Powell told reporters. So, apparently, we've gone from a "data-dependent" Fed to one that now uses psychic powers to react to trouble before it even happens?

Powell said “Weakness in global growth and trade policy have weighed on the economy” but does that mean he will RAISE rates if Trump makes a deal with China?  Powell can't win so he shouldn't try to please Trump, who immediately tweeted about the Fed Chairman:  “No ‘guts,’ no sense, no vision!” for not giving the President the negative rates he demanded just last week. 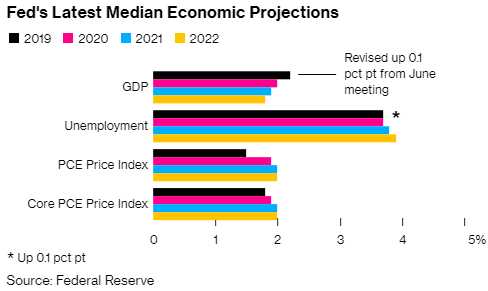 Powell left the door open to “a more extensive sequences of cuts” if needed, but stressed this was not what officials expect. Instead, he described the situation as one “which can be addressed and should be addressed with moderate adjustments to the federal funds rate.”  Updated quarterly forecasts showed officials split over the need for rate cuts this year. Five didn’t want to move. Five saw a quarter-point reduction warranted, while seven saw 50 basis points of easing needed by year-end — half of which was delivered on Wednesday.

As you can see from the Fed's projections, we're wrapping up Trump's Presidency (hopefully!) with barely 2% GDP growth and an uptick in unemployment while the fiction of low inflation is being maintained and keep in mind that if inflation is 2% and the economy is growing 2% – then the economy isn't growing at all – things are just getting more expensive while we produce the same amount of stuff.  To some extent, that's to be expected in a mature economy but we do have 1% population growth so really 3% growth with 2% inflation should be the minimum we shoot for.

I discussed the Fed and the overall economy with Kim Parlee on Money Talk last night, so here's that segment:

Given all those concerns, as we noted in…
END_OF_DOCUMENT_TOKEN_TO_BE_REPLACED