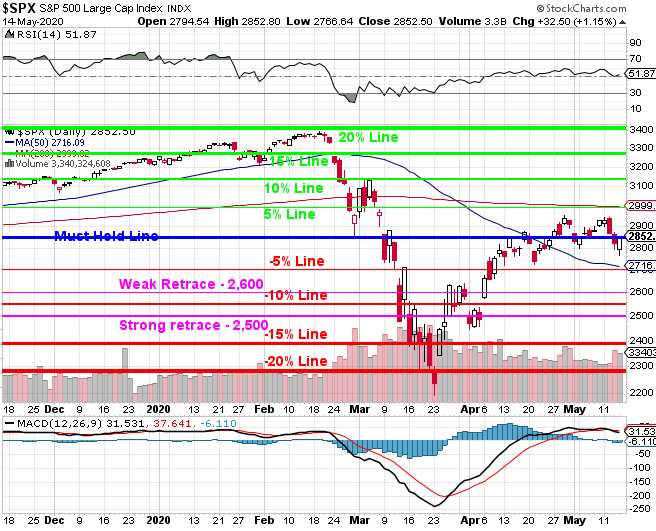 That line is like a magnet and, halfway through the month of May, right where I predicted we'd be when I was on Bloomberg on March 11th (see: "Thursday Failure – Trump Shuts Travel, Provides No Solutions, No Stimulus – Market Tanks (again)" for the recap).  That prediction was not for political reasons – it was based on our assessment of the VALUE of the S&P 500 based on what we knew regarding the virus, the stimulus, the political and social environment.   You know – Macro Analysis.

There's been a ton of BS thrown around as the virus and our Government's response to the virus, has become such a political issue that I can't even say the President is doing a bad job without getting death threats.  My job as an analyst is to tell you what's really going on – whether you want to hear it or not – anything less than that wouldn't just make me bad at my job, it would make me dishonest.

If you want an honest, balanced assessment of where we are now – here's the Mayor of Los Angeles – one of the smartest guys I ever met – giving his assessment of how we stand as cities struggle to re-open:

Also on Wednesday, Garcetti said on ABC: "I think we have to all recognize that we’re not moving beyond COVID-19.  We’re learning to live with it."  “We’ve never been fully closed, we’ll never be completely open until we have cure,” he added.  That's why we got more aggressive with our hedges on Tuesday (ahead of Garcetti) as the S&P approached 3,000 and we did the math and decided that would be a p/e of over 35 on the S&P – a bridge I did not feel even irrational investors and trade bots were willing to cross.

That post became part 7 of our Portfolio Protection Workshop and I strongly urge you to re-read that series over the weekend as we may be approaching another major down leg as the World will hit 5M infections next week and the US alone will pass 1.5M infected as we are still getting 25,000 new cases each day…
END_OF_DOCUMENT_TOKEN_TO_BE_REPLACED