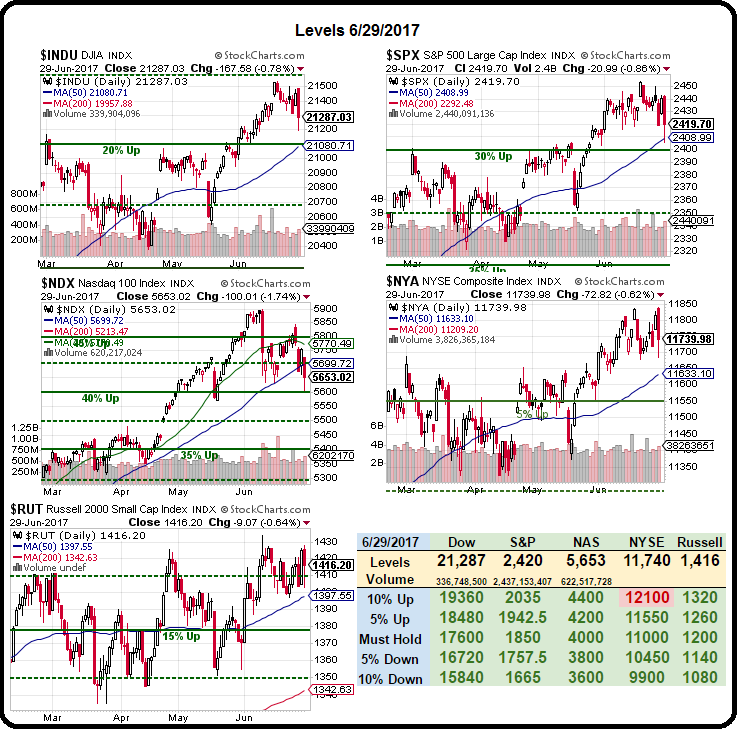 Just like that, half a year has gone by.  Who'd have thought, just 6 months ago, that the World would still be here with Donald Trump as President?  Given how bad we thought things were going to be, they are actually not so bad.  Yes, of course the President's Team is doing everything they can to bring about the Apocalypse but, so far, they've been generally ineffective at, well, everything: "Republicans frustrated as their to-do list grows."

So here we are, closing out the 2nd Quarter with the market near record-highs, despite yesterday's pullback, though we find it hard to trust anything that happens pre-market after yesterday's obviously fake prop-job.  It is the last day of the quarter and windows do need to be dressed but, as I predicted in Wednesday's Live Trading Webinar, the sellers took full advantage of the pumpers yesterday and sold into everything they had – giving us the biggest volume day of the month as declining shares and volume overwhelmed advancers 2:1.

The VIX briefly spiked up 50% as the market plunged and that sent SVXY (we're short on them) plunging back down but a long way to go to our $105 target in September so we're expecting to see a general up-trend in volatility over the summer – but let's not get ahead of ourselves and see how the quarter ends first.

Though the Nasdaq is poised to finishe the month down about 1%, that's nothing compared to the amazing run it's had all year and, as evidenced by the chart below, literally nothing else seems to matter as EVERY OTHER INDICATOR has been falling while the Nasdaq has climbed 15% in the past 6 months.  We have been using the Nasdaq as one of our primary hedges (SQQQ) and they paid off in spades yesterday but that's nothing to get excited about as these dips don't tend to last long (so far).

More of a concern than macro indicators, however, is how much money it's been costing the G20 to prop up the markets for the past decade as Golbal Debt just hit $217 TRILLION…
END_OF_DOCUMENT_TOKEN_TO_BE_REPLACED