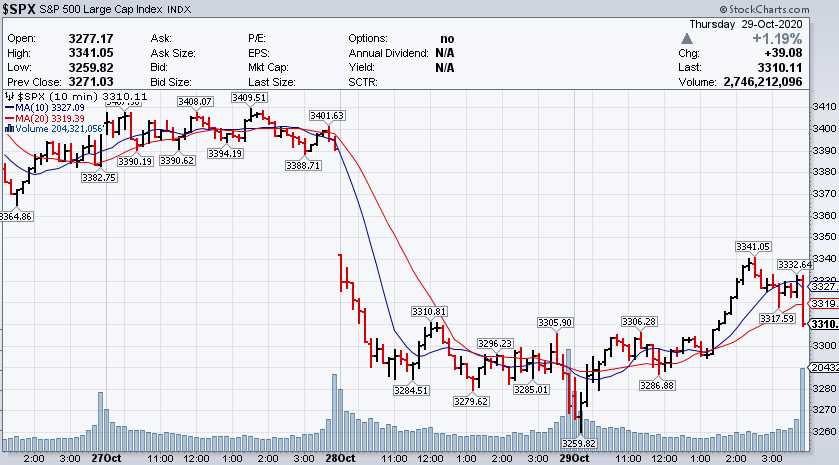 That went pretty much as expected.

This morning we're back down to 3,280 as Apple (AAPL) earnngs disappointed along with, as we predicted – Starbucks (SBUX) but not too badly so, in yesterday's trade idea for our Earnings Portfolio, we're going to cash in our 10 Jan $70 puts for a small profit and the real money will be made on the expiration of the short calls below the $90 line -so those we can ride out for a bit.  We never thought SBUX would hit $70 but the puts would have jumped nicely if SBUX took a big hit.  It didn't so that part of the trade is over.  Never forget why you got into a position.

Earnings reports and guidance from technology companies after the closing bell weighed heavily on markets overnight. Twitter (TWTR) plunged 15.3% in offhours trading after posting its slowest user growth in years and warning that uncertainty around the U.S. Election could compress ad spending.  Apple (AAPL) shares dropped 4.2% ahead of the opening bell after quarterly iPhone sales fell from a year earlier. That, combined with a delay in the launch of the company’s new smartphone, led to iPhone revenue falling more than analysts had expected (but exactly as we had expected).  Shares of Facebook (FB), Amazon (AMZN), Tesla (TSLA), Microsoft (MSFT) and Netflix (NFLX) are all down over 1% premarket – Google (GOOGL) is up $100 (7%) and is pretty much holding the market up by itself this morning.

“The big tech earnings were not that bad but markets did not respond positively, so that does suggest a deeper sense of negativity in the market,” said Seema Shah, chief strategist at Principal Global Investors.  "While big tech has driven the U.S. stock market…
END_OF_DOCUMENT_TOKEN_TO_BE_REPLACED

Faltering Thursday – Rally Runs Out of Steam without Stimulus The Week Ahead – Elections, Data and Jobs
Scroll to top