Just a minor set-back – so far.

We've lost a bit of ground in the past week but only halfway back to where we were two weeks ago (2,850), when we broke out to new highs – that's still pretty strong but, unfortunately, there's an outside chance that Trump could push through his next $200Bn worth of tariffs on China this afternoon and Asian markets were off 1-2.5% this morning but US Futures SEEM not to be worried at all, as they are up slightly.

I say SEEM because the reality is that the Dollar has dropped 0.6%, from 95.60 at yesterday's open to 95 this morning and that SHOULD be popping the markets 0.6% but they ae just flat so all this is doing is masking additional weakness.  Silver (/SI) is up to $14.30 so congrats to the players on that one as we're now up $1,500 per contract.  Even Gold (/YG) woke up and is now back at $1,211 but this is a Dollar-related move and can unwind quickly if the Dollar bounces. 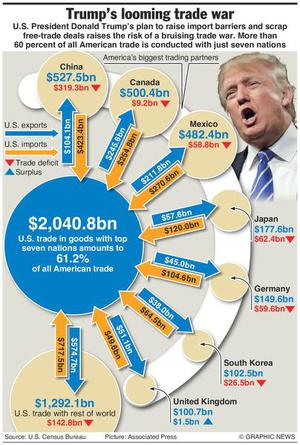 Things can get ugly quickly on the trade front as China has already warned of retailiation over any new tariffs – so far they have matched the US dollar for dollar.  "If the U.S., regardless of opposition, adopts any new tariff measures, China will be forced to roll out necessary retaliatory measures," according to the country's commerce ministry.  Due to China's massive trade surplus over the U.S., many expect the PBOC could further devalue its currency or crack down on U.S. firms inside the country.

Meanwhile, U.S. and Canadian negotiators are engaged in "intense" NAFTA discussions, according to President Trump.  "If it doesn't work out, it'll be fine for our county but it won't be OK for Canada," he added. "I think they will treat us fairly."  Talks broke down last Friday after the two sides failed to reach a deal that would bring Canada into a new trilateral trade pact with the U.S. and Mexico.

It's very unclear what Trump s even trying to accomplish with Canada as we have a fairly balanced trade relationship with them so Trump's complaints that Canada is taking advantage of us makes no sense at all.  Even Mexican trade is barely out…
END_OF_DOCUMENT_TOKEN_TO_BE_REPLACED