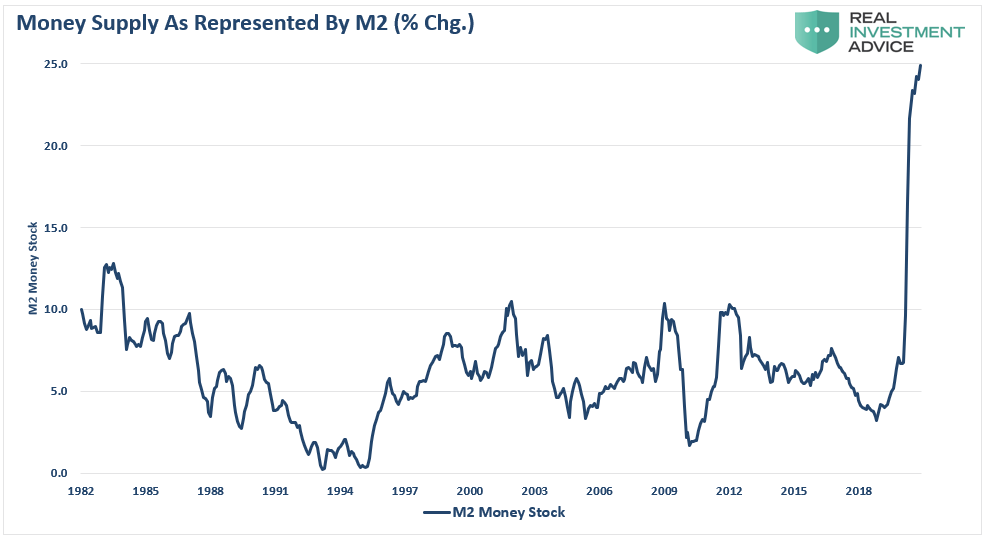 That's been the Fed's consistent message as they like to pretend they can print $9Tn in a single year – adding 25% to the money supply – and it will have no effect on inflation (so we should keep pretending that less than 1.5% for a 10-year note is a fair rate of return).  Any child who's played Monopoly knows that, as more money is put into the game by the banker – more money is spent on things like properties and hotels.  This is toddler economics.

President Toddler owns a lot of hotels and he was well aware that if, we pumped $9Tn into the economy, some of it would trickle down into his organization.  President T's pals also did very well, with America's 660 Billionaires getting over 1,000 Billion Dollars (1Tn) richer during the pandemic.  A 38.6% gain in their fortunes since March of 2020.  In fact, before the pandemic there were only 614 Billionaries – 46 people became Billionaires in the past year!

The chasm between those at the very top of America's economic ladder and those in the middle and at the bottom was immense before the damage inflicted by the pandemic on the U.S. economy. That divide has widened. According to a study released Monday by economists Bruce Meyer from the University of Chicago and James Sullivan of the University of Notre Dame, America’s poverty rate increased by 2.4 percentage points over the final six months of 2020. That’s the largest increase since the 1960s and is nearly double the largest annual increase in poverty over the last 50 years.  We truly are Great Again for the 666 that are taking in all the wealth.  All hail the ruling class!

An additional 8 million people nationwide are now considered poor – and that makes sense because you have to take $5,000 away from 8M people in order to give $1Bn to 40 people – that's just math, folks!  Black Americans (5.4% increase) representing a disproportionate share of those thrust into poverty. More than 70 million individuals (or roughly 40% of the labor force) have filed unemployment claims in the U.S. since the start of the pandemic.  10M more people are still unemployed…
END_OF_DOCUMENT_TOKEN_TO_BE_REPLACED

Which Way Wednesday? Vaccines by May and $1.9Tn – So What? Non-Farm Friday – Is America Working
Scroll to top