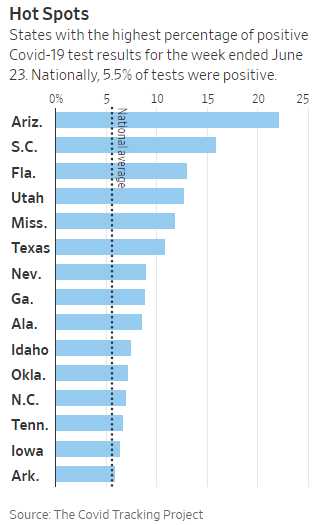 As you can see from the chart, over 20% of the people who are tested in Arizona do, in fact, have the Covid Virus.  Not much better in Florida and anywhere were 1 out of 10 people have the virus it's pretty much game over for containing it.  We did have it contained – but Trump was so eager to call that a victory that he opend up the cages and now we are all Christians that have been thrown to the viral lions by our modern-day Commodus.  Maybe in the future, we'll call the toilet a Trump, instead of a commode in his "honor"…

That's right, Commodus was the son of the popular Marcus Aurelius but, as Gladiator fans surely know, his reign was one of rot and corruption as he surrounded himself with incompetent toadies and managed to intiate the complete anhilation of the Roman Empire after 12 years of incompetent rule (he was assassinated):

During his solo reign, intrigues and conspiracies abounded, leading Commodus to an increasingly dictatorial style of leadership that culminated in a god-like personality cult. His assassination in 192 marked the end of the Nerva–Antonine dynasty.

Commodus had upset the peaceful balance that Rome had enjoyed for almost eighty years. Currency was devalued and the economy collapsed, leading the country into a civil war that lasted four years. His rule was the beginning of the end for that most famous empire..

Yikes, sounds a lot like the movie we are all currently starring in, doesn't it?  I think we're just about in the middle of act two:

In context, the Latin panem et circenses (bread and circuses) identifies the only remaining interest of a Roman populace which no longer cares for its historical birthright of political involvement. Here Juvenal displays his contempt for the declining heroism of contemporary Romans, using a range of different themes including lust for power and desire for old age to illustrate his argument.[6] Roman politicians passed laws in 140 BC to keep the votes of poorer citizens, by introducing a grain dole: giving out cheap food and entertainment, "bread and circuses", became the most effective way to rise to power.