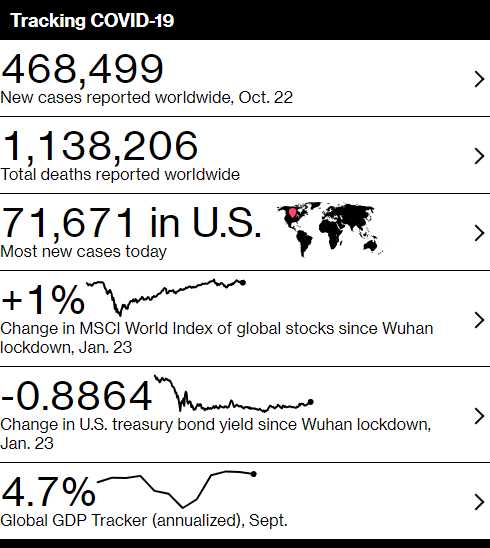 Higher and higher we go.

994 Americans died from Covid-19 yesterday, 1 per minute during the debate where Trump denied it was a problem, leading Joe Biden to give him a WTF?!? look.  As Trump falsely stated that we are "rounding the corner" on the virus (we are not) and that a vaccine was ready (it is not), Biden pointed out that projections indicate that over 300,000 people (50% more) will be dead by Christmas – though he didn't say it that harshly.

"If you look at the people who were sick, but didn't require hospitalization," Dr. Fauci said, "when you look at the percentage of them — that actually recover, and recover within two to three weeks — a substantial proportion of them don't feel right."  According to a CDC survey, symptoms subsided in some people in as little as five days, while others, studies show, have experienced symptoms several months later. Only 65% of 292 people surveyed in the CDC study from April 15th to June 25th said they returned to their normal health as soon as five to 12 days after they tested positive for Covid-19 – as…
END_OF_DOCUMENT_TOKEN_TO_BE_REPLACED