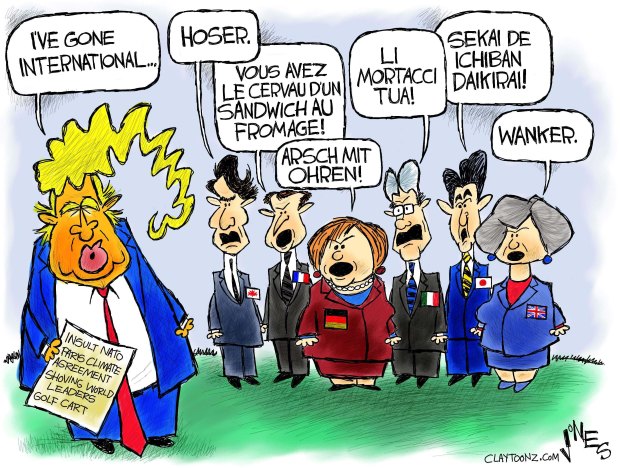 The market indexes are at record highs as Americans have total confidence in our President's ability to win the trade war as he sits down for a 3-day meeting with other World Leaders.  Trump has signaled his intention to continue pursuing an aggressive trade agenda even if it comes at the expense of America’s standing in the world.  The “World trade system is a mess,” Mr. Trump’s top economic adviser, Lawrence Kudlow, told reporters on Wednesday. “Trump is trying to fix this broken system.”

Of course, the "broken system" is the sole opinion of Team Trump while the rest of the World thinks it's America that is "broken" and that difference of opinion could turn very ugly if our leaders can't come to some agreements over the weekend.

“Tariffs imposed last week by President Trump on the EU and Canada have increased significantly tensions before the meeting,” a senior EU official said, adding that a breakthrough to ease trade tensions was unlikely. “We have extremely low expectations.”

The consequences of the U.S. driving away allies, even if it wins short-term trade concessions, could do lasting damage to the strength of America’s coalition (see "4 charts showing why putting tariffs on your friends is a bad idea"). “If the U.S. loses their support, then it’s a different ball game at the global leadership level,” said Fred Bergsten, the founding director of the Peterson Institute for International Economics.  At last week's meeting of Global Finance Ministers, all 6 other G7 Nations put out a joint statement rebuking Trump's tariffs on steel and aluminum.