Before I get into taxes, I want to apologize to Roy Moore.

He's been accused of being a sexual predator just because, when he was in his mid-30s, he had sex with girls that were as young as 14 and maybe he was a little gropey and maybe, after forcing a 16 year-old girls' head into his lap, he shouldn't have said ""You're just a child, I'm the district attorney; if you tell anyone about this no one will ever believe you."[23][24]", but this is a very different culture (Alabama) than the one we're used to – so who are we to judge who the people of Alabama want representing them in Washington?  After all, when Donald Trump was 35, his wife was 11.

Roy Moore, if he is elected, certainly won't be the most evil, loathsome figure in the Death Star that is the US Senate.  There are people there who, as we speak, are plotting the deaths of thousands children by starvation, heat, cold or a slow death from many childhood diseases.  Some of them don't even want to vaccinate our children – potenially unleashing new epidemics on our nation – the first of many plagues we are likely to endure under the Golden Pharoh. 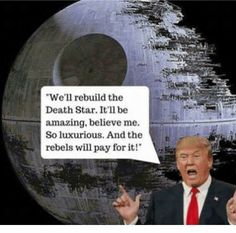 9 MILLION low-income children will lose their health care on December 31st.  This is not Obamacare, these are children we, as a country, decided did not deserve to suffer just because their parents committed the mortal sin of being poor.  Not that the GOP has forgotten about the parents.  In order to pay for $338Bn of the tax cuts they are giving to the Top 1%, they are repealing the Obamcare Mandate Provision that will cut 13M people off health care.  That's over 10 years so $33.8Bn a year means they have to take $2,600 away from each poor person they put at risk.  Keep that in mind – that's what your life is worth to a Republican.  Even less according to Brookings, who see 32M people losing health care under these provisions!

Those are, of course, the FEDERAL savings and all they do…
END_OF_DOCUMENT_TOKEN_TO_BE_REPLACED