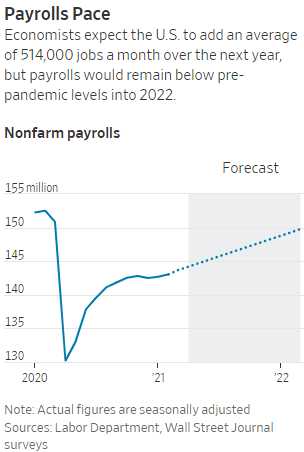 The markets are closed this morning but, for some reason, they are still releasing the Non-FarM Payroll Report, which is usually a market-mover.  It's 8:30 now and the numbers are bigger than expected with 916,000 new jobs added in Biden's second full month as President and that's well over expectations and, more importantly, Unemployment is down to 6%.  The Ftures are open and the Dow is blasting higher and the other indexes are likely to follow

“There’s a seismic shift going on in the U.S. economy,” said Beth Ann Bovino, a Ph.D. economist at S&P Global. The confluence of additional federal stimulus, growing consumer confidence and the feeling that the pandemic is close to abating—despite rising infections in recent weeks—is propelling economic growth and hiring, she said.

Stronger growth should return jobs to industries with the deepest losses during the pandemic, such as restaurants, stores and hotels, and support additional job growth at warehouses, delivery services and manufacturing.  Job growth could also pick up in hard-hit cities in the Northeast and California, and in tourist hotbeds such as Las Vegas and Orlando.

There are still about two million fewer food-service jobs this year in the U.S. than before the pandemic-related shutdowns that began in March 2020. The industry accounts for one in five total jobs lost in the past year, suffering the most pandemic-related losses.  Those jobs can come back quickly once we are vaccinated and more people with jobs means more people who can afford to eat out – so the cycle tends to feed itself. 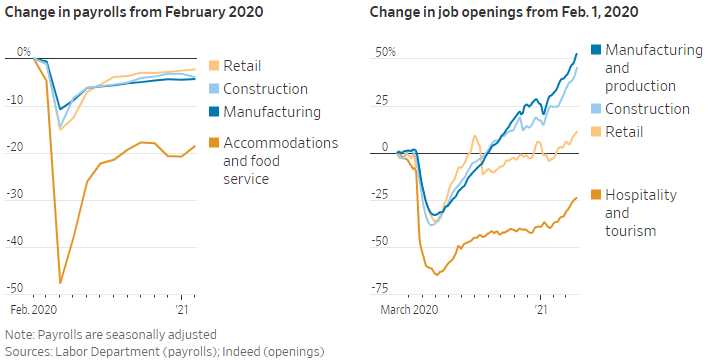 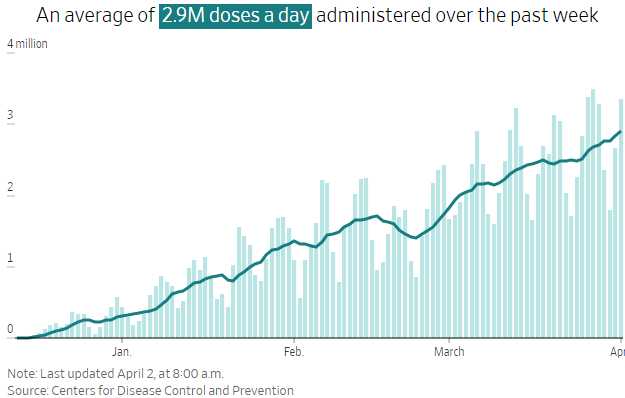 Another major factor in favor of a better Q2 is our very successful vaccination roll-out in the US with an average of 2.9M doses PER DAY being given out in the US, that is 87M more in April and 90M more in May – only if we don't speed up – Biden is miles ahead of his vaccine rollout schedule after 72 days on the job.  30% of the poulation has gotten at least on dose and I'm getting mine tomorrow!   My appointment is at 11:36 am, so they have started to get very exact and efficient about it and that's helping to speed up the process.  My mother got hers in early March and she waited 4 hours in a car line both times.