It's one long Sunday for me as I just flew in from California.

I left at 10pm, didn't sleep on the plane and now it's 8am and I find myself essentially continuing what I was saying last Monday (14th), when we flatlined at 2,965 after a very bad Friday sell-off.  This Friday was not as bad, with the S&P finishing at 2,986 and we're still flirting with 3,000 – again.  So it's the same old, same old with not much having changed over the weekend so earnings will be our primary focus for the week.

Lots of fun reports already and, so far, earnings have beaten low expectations, for the most part and we're into the meat of the S&P 500, with about 1/4 of the index reporting this week: 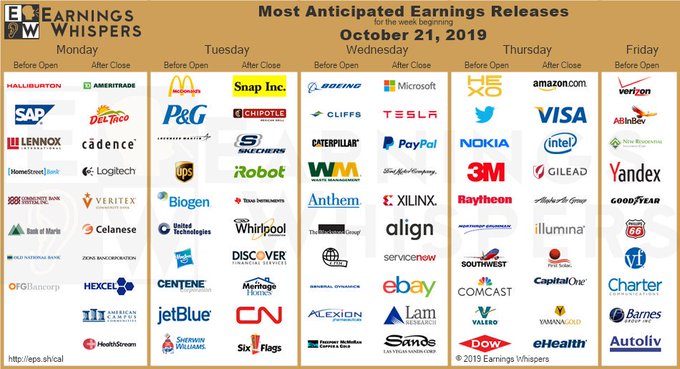 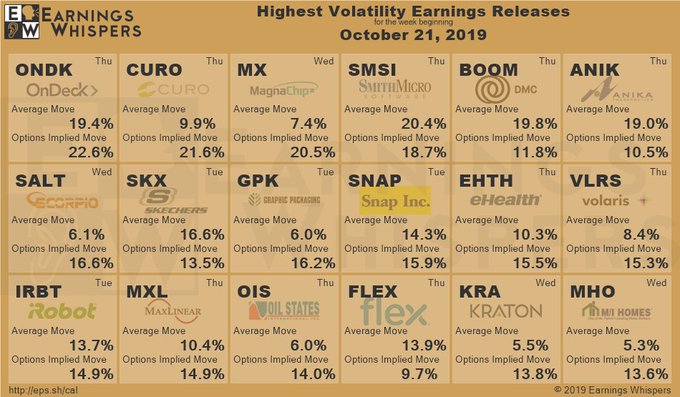 We'll keep an eye on the Tech Sector as the earnings there have been pretty erratic.  Semiconductors rose 6.74% in Q3, topping all six industries in Tech.  Semis are followed by Technology Hardware (+5.26%) in second place and IT Services (-3.19%) at a distant third. The worst Tech Sector Performer has been Software, whose quarterly return stands at a negative 16.3% but still many companies to report.

In June, Goldman Sachs issued a warning to “write off high-growth tech stocks,” according to a CNBC report – this was not heeded by the market as the Nasdaq is up about 800 points (10%) since June.  The reasons for Goldman’s warning are double: they said that Technology stocks may be overvalued at their current levels, and that talks about potential regulatory changes from Washington may make stocks within the sector something of a “hazard.”