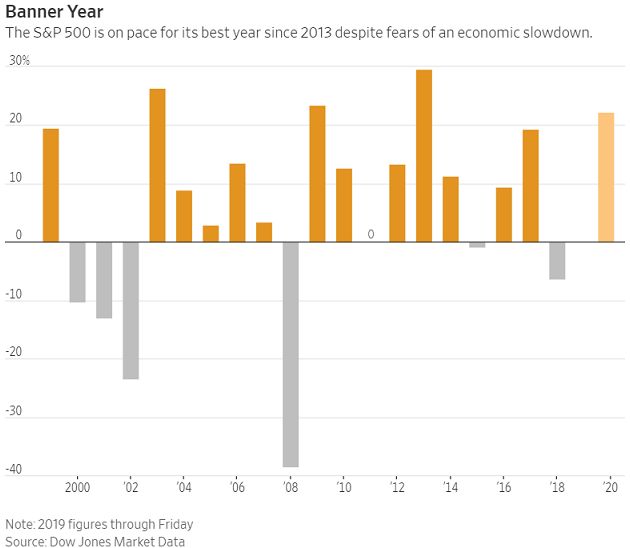 The S&P is already up 22% for the year and, as you can see from this WSJ chart,  We've had lots of good years lately with the 2 down years in the last 10 combining for a total loss of less than 7% while the 8 positive years have added 142% but keep in mind that's cumulative, with the gains compounding each year – giving us the incredible new highs the market is at right now – despite having first dropped almost 40% in 2008.

On Fox News this morning, a guest was saying that we can't raise taxes now because the economy is so good that there's bound to be a recession coming so we need low taxes to fight off the recession.  Of course, when there is a recession – they'll tell us that they need to lower taxes too.  I've been watching a lot of Fox News this weekend as I'm on a ship and it's the only US news channel.  By the way, when are the Democrats going to stop harassing poor Presient Trump? 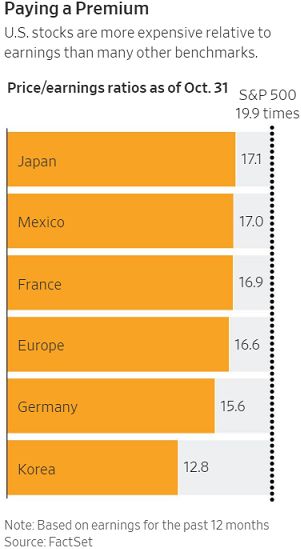 Our market rally has clearly been led by the Information Technology sector, which is up 36% and companies like Apple (AAPL), Chipotle (CMG) and Target (TGT) are up over 60% for the year, boosting the large-cap sector.  The S&P 500 is now trading at 20 times the earnings of it's components - another all-time high and significantly higher than other countries are trading.

When will the music stop – if it ever does?  The "normal" p/e ration for the S&P 500 is 16 – so we're 25% above that but "normally" there are other things you could do with your investment capital, like put it in the bank, bonds or housing but the banks and bonds now CHARGE YOU to hold your money in many countries and don't pay enough to keep up with inflation in the US while bonds are ridiculously low thanks to the Fed – certainly not a place you want to invest.