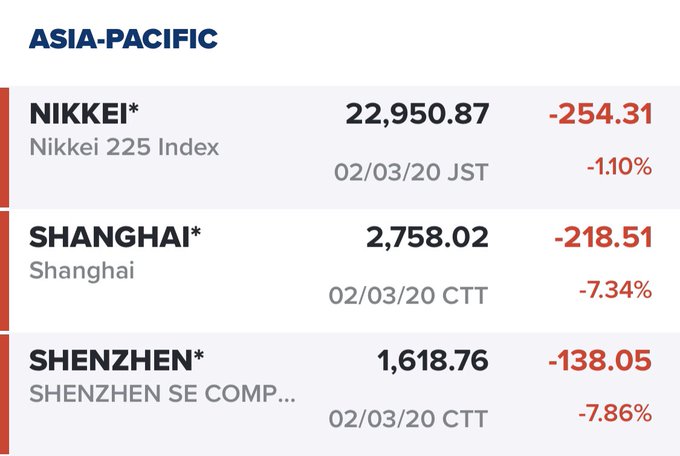 On the bright side, only 2% mortality is down from 3% but maybe that's because the rate of infection are exploding fastert than people are able to die.  There were 10,000 infections on Friday and 213 deaths so 74% more infections and 71% more deaths isn't exactly what we usually call "under control" over a weekend, is it?

The Shanghai Stock Exchange re-opened from their New Year's holiday down 7.34% and, as I explained to our Members in Friday's Live Chat:

China rally has same low volume problem as US so they will be lucky not to fall 7.5%  Monday, which is pretty much limit-down in China since they halt stocks at 10% so very hard to get the average for the index past -7.5%. 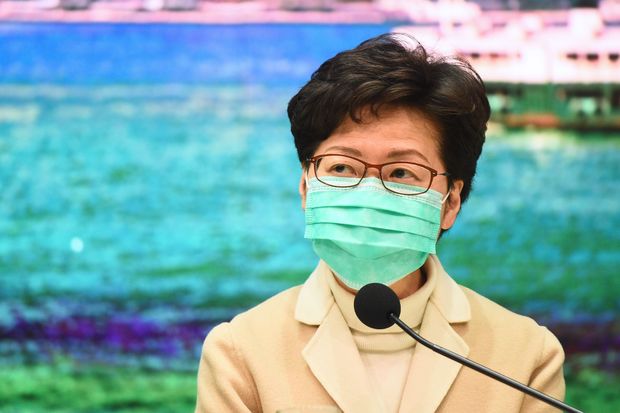 China is trying to stop the slide by stepping in economically, with the PBOC pushing in a massive stimulus measure as well as a cut in the reverse-repo rate to push liquidity back into the system.  Apparently, oil demand in China (the World's 2nd largest consumer) was down 20% in January and that will get worse for February as more and more people are in the ever-expanding quarantine zone.

Hong Kong's Carrie Lam (pictured) is fighting her own people who want to shut down the boarder with China and she doesn't exactly inspire that "Don't Panic" vibe wearing a mask when she's interviewed, does she.  Hong Kong's hospital workers voted 3,123 to 10 to shut down the boarders and they are going on strike today to attempt to foce a shutdown before they are overwhelmed by an epidemic they feel can get quickly out  of hand.

My kids asked me why people in America don't seem to be worried about the virus and I told them to picture the Earth as a ball and us as ants and we hear rumors about a fire on the other side of the ball but we can't see any actual sign of it.  We can panic about it or we can go about our daily lives and those are…
END_OF_DOCUMENT_TOKEN_TO_BE_REPLACED