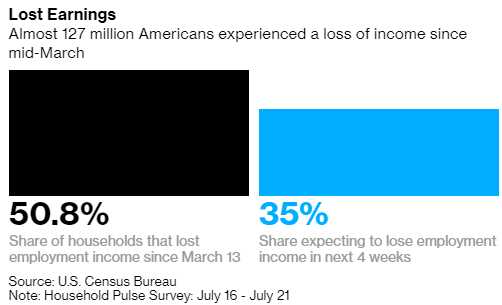 OVER 1/2 of US housholds have lost some income since March.

Jobs have been furloughed, businesses closed, hours reduced and salaries cut.  While the health emergency and lockdown were the biggest direct cause of unemployment, there were secondary effects, too. Pandemic-induced layoffs were responsible for 11.6 million job losses. A further 6.9 million are due to the unavailability of child care, which is why Trump wants to force children back to school and risk their lives and the lives of their families – it's making him look bad when they stay safe at home. 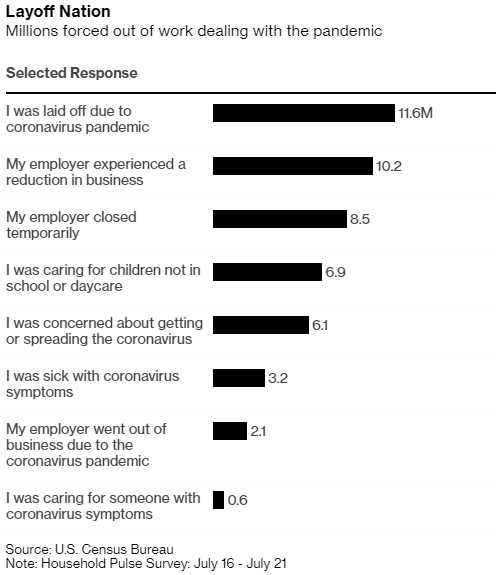 The survey recorded how a public health crisis turned into a food crisis, as the responses showed that millions sometimes or often didn’t have enough to eat. That number rose to 23.8M for the week ending July 24, an increase of almost six million since the first week of May.  At the same time, after a near-total shutdown of restaurants early in the crisis, Americans – especially those with higher incomes – have gradually been getting back into the habit of dining out. Still, spending remains far below pre-pandemic levels.

The Centers for Disease Control and Prevention, in a study conducted in May and June, found that more than 10% of adults seriously considered suicide — a figure that rose to more than one-quarter among 18-24 year-olds. It also found a jump in substance abuse, and said mental health outcomes were worse among racial minorities, essential workers, and unpaid caregivers.

The Census Bureau’s survey, in addition to high levels of anxiety and depression, reported on problems with physical health, as well. It found that more than 70.9M adults did not get medical care that they needed, for a condition unrelated to Covid-19, between mid-June and mid-July.

While none of this seems to affect the stock market, you KNOW the market is wrong.  Just walking down the street tells you the economy is in trouble as so many stores and restaurants you walk past are temporarily or permanently closed.  And this is WITH the economy running on MASSIVE stimulus – MASSIVE is nowhere near a big enough word to describe the stimulus, actually, as it's been about one third of our GDP already in the first 8 months of this year with more on the way.  Even so, market returns have been mixed.