It's a big week for the Central Banksters.

The Bank of Japan kicks off the week with a 2-day meeting in which it is expected they will reduce their spending on ETFs that have been propping up the Nikkei for the past decade.  The BOJ has been criticized for favoring large-caps and, with the index at 22,580, the Central Bank has decided to give some love to the broader Topix Index to the tune of 6,000,000,000,000 Yen per year (only $54Bn in real money) but their previous monetary madness has made the BOJ the owner of 75% of the ENTIRE Japanese ETF market (about 4% of the entire market, 10% of the 225 Nikkei large caps). 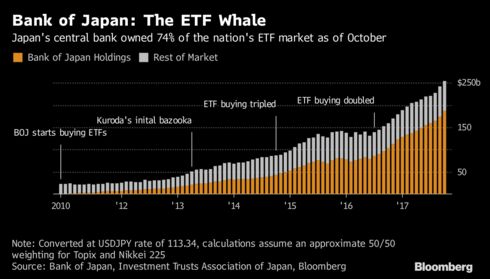 In theory, the BOJ has made a lot of money buying Japanese stocks but, in practice – good luck selling them when they have been the primary buyer for the past 5 years.  Our own Federal Reserve doesn't dabble directly in stocks – they just print money and hand it out to Banksters, who then buy up stocks or, even better, lend Trillions of Dollars to Companies that buy up their own stocks.  In Q1 alone this year, S&P 500 companies bought back $190Bn of their own stock in a year that's on track for over $1Tn in buybacks – most of it on borrowed money. Our Federal Reserve prefers to buy US Treasury notes, about $2.4Tn of those.  Isn't it great how easily we can throw TRILLION around?  As if it's not a big deal….

To put this into context, the Dow has a MONTHLY money flow that is up or down $10Bn for 30 large caps so imagine the effect of $100Bn worth of inflows through buybacks every single month!  The BOJ in Japan, the PBOC in China, the ECB in Europe and US Corporations using easy money from our own Federal Reserve represent ALL of the net buying of the Global stock markets.   What will happen when and if they ever do decide to withdraw their stimulus.

Of course, that doesn't mean we should be bearish.  Consider that Las Vegas is a city in the…
END_OF_DOCUMENT_TOKEN_TO_BE_REPLACED