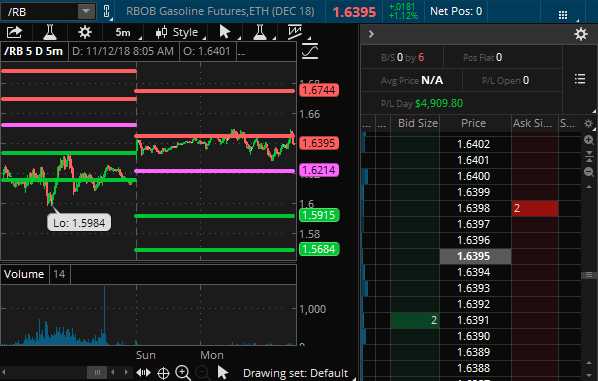 Oh what a beautiful morning!

We went long on Gasolione (/RB) into the weekend as we expected OPEC to do SOMETHING to prop up Oil (/CL) at the $60 mark and we thought /RB Futures would make a good play into Thanksgiving regardless.  We did, in fact, get noise over the weekend that our freinds the Saudis see the need to cut oil ouput by another 1Mb/d next year to maintain "price stability".

I had predicted we'd get down to $62 when I was interviewed on Nov 1st at Investing.com, but our first attempt to go long on oil and gasoline failed but this time /RB made the big payout with an almost $5,000 gain on 6 long contracts as we stopped out our last contracts at $1.64 - a nice way to start our week… The next long attempt can be made over $1.65 on /RB or back at the $1.625 line and, of course, we'd love to give $1.60 another try but you have to use tight stops on Gasoline as the contracs pay OR LOSE $420 per penny of movement on each contract.

When you get a strong move based on a quote – even from a very reliable source – you have to look to take quick profits because, as is the case with Gasoline – nothing has Fundamentally changed – just some Saudi Oil minister says (while oil is failing $60 and US inventories alone are climbing by 5Mb/week) that they "might" need to cut Global Production by 7Mb/week – a month from now – if the other OPEC members agree.

So, for future reference (and we've done this before but it's like school, I have to repeat things many times before a light bulb appears above the students' heads):  OPEC (now called the new and improved OPEC+ in an effort to rebrand and include Russia, Mexico and Kazakhstan) generally acts to support oil at $60 ($70 for Brent) like it's an emergency so wherever Gasoline is at the time tends to benefit as well and especially when you have a major down move, you can play the 5% Rule™ for a bounce: