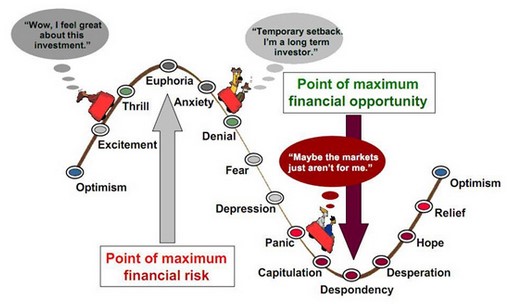 That's what the Banksters want to print in their monthly reports to get their customers to pull their CASH!!! off the sidelines and put them into something that generates fees for the bank.  They don't give a crap whether you win or lose – as long as they get their fees.

Morgan Stanley says "this time will be different" and that we shouldn't worry about Central Bank de-leveraging or China's Credit Collapse because (and these are their points, not me just making it sound absurd), although "global growth will moderate somewhat, and will remain above trend."  That would be great but the "trend" has been around 2% and global stocks are not priced for "above 2% growth" they are priced for 4% growth or 6% growth and we are miles away from that!

Goldman's Chief Equity Strategist, David Kostin says the company's HNW clients are "confused" by the lack of inflation (as that's what we expect in a great economy) and he ponts back to the disparity of measurement that we touched on last week.

Like me, Kostin is recommending inflation hedges, urging his clients to ignore what the Fed is saying and pay attention to the evidence that's right in front of their eyes.  Zero Hedge does a very good job pointing out what's wrong with inflation measures as they note that: "A leading driver of disinflation has been the Video, Audio, and Computer category where prices dropped by 5% in 2015, by 10% in 2016, are declining at an average pace of 7% YTD."  This is one of the stupidest things the Government does when measuring inflation.  Basically, if you bought an IPhone last year for $1,000 and it had 64Gb or Ram and this year you spend $1,200 but it has 128Gb of ram, the Government says you are getting more for your money so that phone is counted as 40% CHEAPER than the one you bought last year.

Of course it's a bit more complicated than that but processor speed per Dollar goes up too so yes, electronics are almost always a drag on inflation, as are appliances.  So take this chart with a Lot's wife-sized…
END_OF_DOCUMENT_TOKEN_TO_BE_REPLACED

$2,000 Friday – Big Win on Nasdaq Shorts offset Oil Losses Toppy Tuesday – Back to our Shorting Line on the S&P 500
Scroll to top