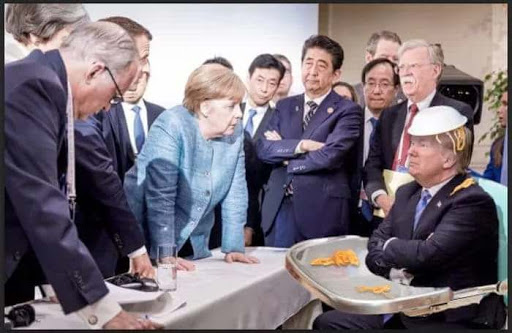 I thought I was losing my mind as the Futures were up this morning after Trump blew up the G7 meeting and refusted, for the first time ever, to join the rest of the Free World Leaders in signing the joint communique.  How can the markets be bullish when we are walking back the steps the nations agreed were necessary after WWII to prevent WWIII?  Trump can double down tomorrow if he also blows the negotiations with Kim Jung Un and ticks the Doomsday Clock up to 11:59:30.

German Chancellor Angela Merkel said Sunday that President Trump's refusal to endorse a communique from the Group of Seven (G7) leaders was "sobering and a bit depressing."  In the same interview, Merkel said the European Union was preparing to implement counter-measures against U.S. tariffs on imported steel and aluminum.  If they retaliate, they're making a mistake," Trump declared before departing the annual Group of Seven summit, which includes Britain, Italy, France, Germany and Japan.

Speaking of Doomsday, the Fed is almost certain to raise rates 0.25% on Wednesday and that should kick the 10-year rates permanently over 3% for the duration.  So far, the markets have shrugged off every possible sign of rising rates, rising wages and rising inflation as stock prices have inflated to record levels but, for those of us who believe in Physics, Match, Economics…. Reality – a day of reckoning is coming – we just don't know when.

Crypto currencies are also having a doomsday as BitCoin falls below $7,000 as a South Korean Coin Excahange was hacked over the weekend.  See, this is why we have BANKS and Government-backed currencies – there's a massive system in place that insures against loss and theft of your US Dollars.  We put that in place after years of the exact kind of random losses, robberies and devaluations associated with old monetary systems.  Crypto currencies are sure making things great again – for bank robbers!

And sure, eventually consumers will wise up and learn to "bank" their crypto-coins in more reputable exchanges with better securtiy and crypto may even develop it's own FDIC to insure deposits but all that stuff is hard…
END_OF_DOCUMENT_TOKEN_TO_BE_REPLACED