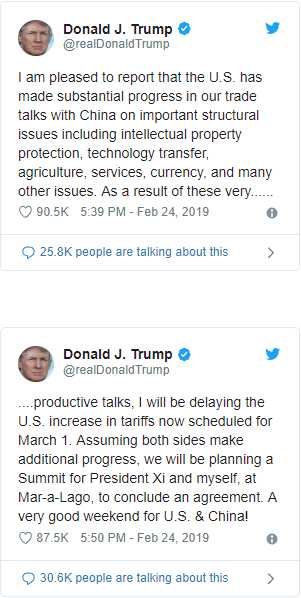 President Trump said Sunday he would delay an increase in tariffs on Chinese goods set to take effect at the end of this week, citing “substantial progress” on issues including intellectual property and technology transfer after a weekend of talks.  In a tweet, Mr. Trump wrote that should progress continue, the U.S. would plan a summit with President Xi Jinping of China to “conclude an agreement” that would settle a yearlong trade fight between the two nations.

While Trump’s tweets didn’t specify how long the extension of a trade truce would last or any date for a potential summit, we are halting the tariff increase on $200Bn worth of Chinese goods that were scheduled to go from 10% to 25% as of March 1st, so that's $30Bn already not being collected and I'm pleased with just that as my primary fear was that trump wouldn't be willing to give up the $360Bn budget offset those tariffs represented (but even his thick fans were starting to notice that they were the ones paying the tariffs, not the Chinese).

The key concession Trump seems to have gained from China is a promise to buy $300-400Bn more goods per year from the US to "balance" the trade and mostly that will come in the form of farm and energy products (you didn't think the Chinese would actually want our manufactured goods, did you?) and that's already giving our Natural Gas (/NGV19) trade a nice bump (we talked about that in  last Wednesday's Morning Report) and, of you missed that one, try going long on July Coffee Futures (/KCN19), which are still down at $102.45 as that's been very depressed all winter.

Oil prices are off a cliff today as the Trump, feeling all-powerful this morning, decided it was time to declare "Oil prices getting too high. OPEC, please relax and take it easy. World cannot take a price hike – fragile!".  Keep in mind that Trump had room for another 200 characters, so he didn't need to sound like a cave man but it's possible he's working on some new type of Haiku.

Oil is actually 10% lower than it was last year but now it's lower than that, dropping 2.5% this morning back below $56 but we knew it was too high on Friday and I had made a call for…
END_OF_DOCUMENT_TOKEN_TO_BE_REPLACED