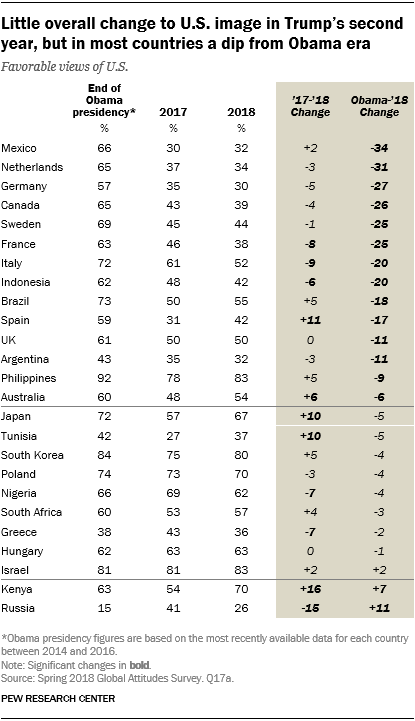 They're not new problems and trade issues and bond issues are self-inflicted problems but, as was made obvious by the Kavanaugh confirmation this weekend – these self-inflicted problems aren't going to go away soon.  If America is indeed on the wrong path – the wheels are being locked in with lifetime appointments that insure these policies will last long after Trump has gone to pasture.

As you can see from the chart on the right, other than Israel, Kenya and, of course, Mother Russia, other contries' view of America has been deteriorating rapidly since Trump took office – worse even than Trump's poll numbers at home.  People in other countries consider the United States, not Russia or China or Iran – to be the single biggest threat to World Peace.

Meanwhile, Trump's rollback of Obama's Climate Policies and withdrawal from the Paris Climate Accords has, according to the new report from the United Nations, set us on a path for Global Catastrophe as soon as 2040 which, in case you are not good at math, is only 21.5 years away.

The report, issued on Monday by the Intergovernmental Panel on Climate Change, a group of scientists convened by the United Nations to guide world leaders, describes a world of worsening food shortages and wildfires, and a mass die-off of coral reefs as soon as 2040 — a period well within the lifetime of much of the global population.

The report “is quite a shock, and quite concerning,” said Bill Hare, an author of previous I.P.C.C. reports and a physicist with Climate Analytics, a nonprofit organization. “We were not aware of this just a few years ago.” The report was the first to be commissioned by World leaders under the Paris agreement, the 2015 pact by nations to fight global warming.

Look, I know you don't want to hear this stuff on a Monday morning but we are talking about a major global crisis and WE ARE MAKING IT WORSE, not better, not even the same, because we have "leaders" who are not only ignoring the problem but ACTIVELY working…
END_OF_DOCUMENT_TOKEN_TO_BE_REPLACED

Faltering Friday – Rally Retraces from the Top Tumblin’ Tuesday – Dollar Up, TBills Down, Markets Look for a Bottom
Scroll to top