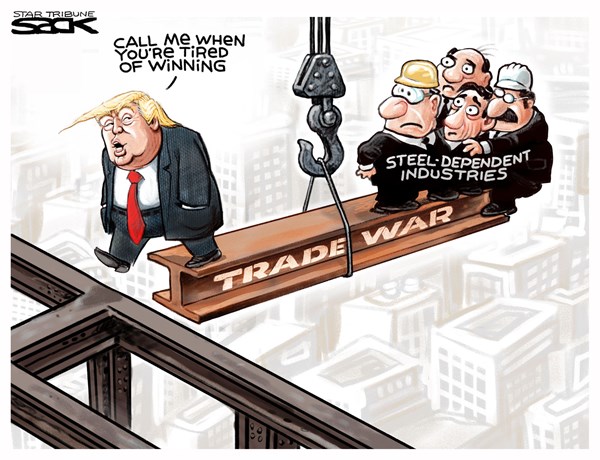 I'm on vacation and Europe is on vacation which leaves no one to trade the market, so don't expect much this week or next.  Even the President is on vacation but, sadly, not away from Twitter, where he's having a busy weekend claiming victory in the Trade Wars and attacking the media.  So far, the markets have been oblivious to the escalating Trade War, which is very, very dangerous and the reason we pressed our hedges at the last options rollover.

Another guy who can't stop tweeting is Elon Musk and, following the Presendential tradition of inappropriate tweeting, Musk sent out a parody video of Hitler shorting Tesla stock which is, frankly funny and, coincidentally, I once made a paradoy using the same video on the same subject when the company was much smaller ($150 and we were long) but, then again, I don't run a $60Bn company.  Actually, if you read my 2013 parody's text – it does lay out exactly what Musk had to accomplish to get to this stage of success.

Oddly enough, we're getting ready to short TSLA again as it re-tests its highs as it is overpriced.  Even if they are able to further ramp up production they are still bleeding cash and, as the Trade Wars escalate, TSLA could get caught in the crossfire but, over $360, it's priced well beyond perfection.

Apple (AAPL) is still a bargain at $1Tn ($208) and people are talking $250-300/share now which suits us fine as our pre-earnings play on AAPL for our Short-Term Portfolio was: