Boeing is still having trouble fixing the 737 Max planes and announced over the weekend they would be cutting production of the planes for now, which is sending their stock down $16, pre-market, which is good for about 130 Dow points and BA is also a big player on the S&P 500 so it's responsible for all of the pre-market losses (as of 7:30 am) so far.

"As we continue to work through these steps, we're adjusting the 737 production system temporarily to accommodate the pause in MAX deliveries, allowing us to prioritize additional resources to focus on software certification and returning the MAX to flight," CEO Dennis Muilenburg said in a statement. "We have decided to temporarily move from a production rate of 52 airplanes per month to 42 airplanes per month starting in mid-April."

Other than BA, the rest of the indexes are continuing to show strength and there's no sense fighting the tape, especially with all of our indexes now above their 200-day moving averages with 3 of the 5 majors making what are called "Golden Crosses", where the 50 dma crosses over the 200 dma – a fairly reliable bullish chart patten. 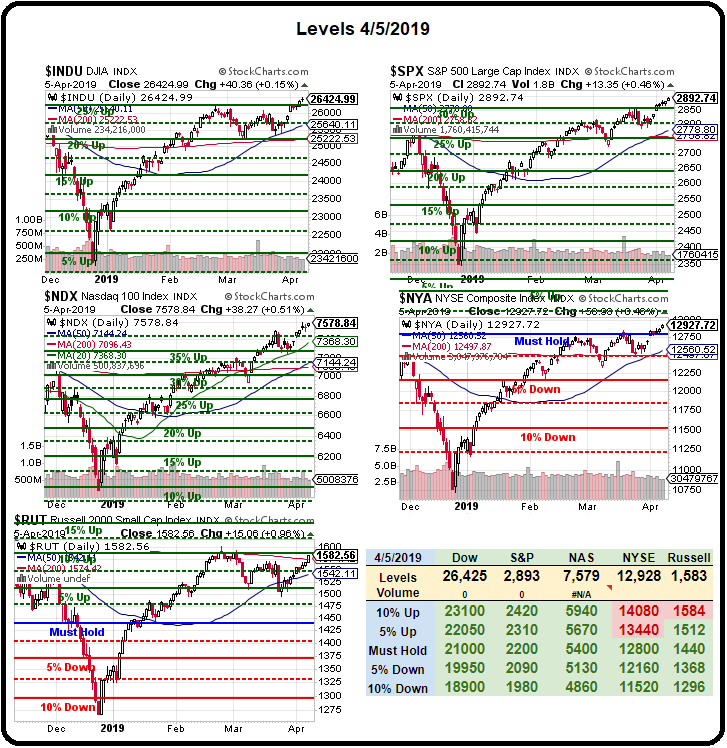 That doesn't mean this isn't a good time to grab some hedges.  In fact, it's the best time to hedge as the indexes are high and the Volatility Index (VIX) is low, which means your cost of insurance is low as well – since the general sentiment is that the rally will continue.

In Friday Morning's PSW Report, we liked shorting the S&P 500 Futures (/ES) at 2,900 and we topped out at 2,899.50 and now we're back town to 2,895, which is still a good shorting spot as long as you keep very tight stops above.  Nasdaq (/NQ) 7,600 is also going to be hard for the bulls to cross, so that's another excellent shorting line with tight stops above in the Futures.

Last Tuesday we asked: "Are We Moving Up to a New Range?" and we have gained 50 S&P points since then and the Nasdaq Ultra-Short (SQQQ) Jan $10 calls we liked at $1.80…
END_OF_DOCUMENT_TOKEN_TO_BE_REPLACED