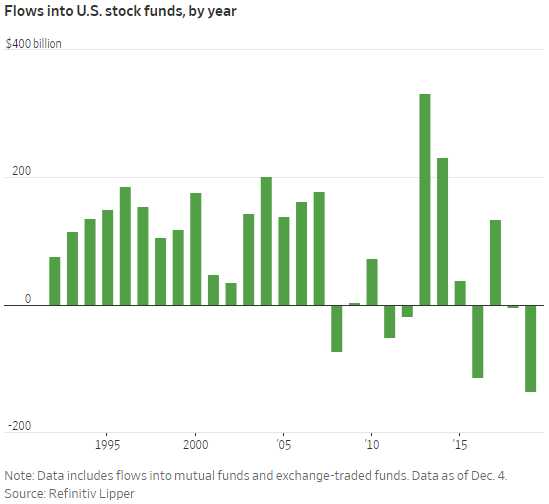 That's the NEGATIVE "adjustment" we're going to see in the prior year (March 2018-2019) Non-Farm Payroll report according to the BLS, when they announce their revision in February.  That means that the average job reports have been exaggerated by 40,000 jobs per month.  That's a staggering number – it's a number so large it's never happened before - yet not a peep about it in most of the MSM?  One of the most critical data reports we get in the US is overstated by an average of 20% per month!

None of this, of course, makes any difference to Traders, who are still paying whatever price the market gets marked up to – even while Investors (who are NOT traders) pulled $135.5Bn OUT of the US market so far this year – more than they pulled out in 2001, 2008, 2009 or any other year on record – EVER!

As you can see from the chart, this is no small event and now it's 3 of the last 4 years that money has flowed OUT of the market – even as the market has gotten more and more expensive for those that stayed in it.  We got out in September – cashing in our bloated Member Portfolios and we've only put a small amount of that cash back to work since and perhaps we're being overly cautious but a chart likes this makes me think we're not being cautious enough. Analysts say the trend highlights investors’ apprehension toward a stock market buffeted by the long-running U.S.-China trade war and lingering worries about a potential recession. Stock funds have bled money over seven consecutive quarters, dating to the second quarter of 2018—when trade tensions between the U.S. and China ratcheted higher.  As much of this money floods into Treasuries, it's also a key factor in keeping rates down (so far, with higher note prices indicating lower rates).

All this can reverse in a heartbeat and that would be very inflationary, potentially caused by a Trade Deal with China, which could have people running out of bonds and back into the market.  That means we can certainly expect to see some "Secret Santa's Inflation Hedges" for 2020.  We haven't done those since 2017 as…
END_OF_DOCUMENT_TOKEN_TO_BE_REPLACED