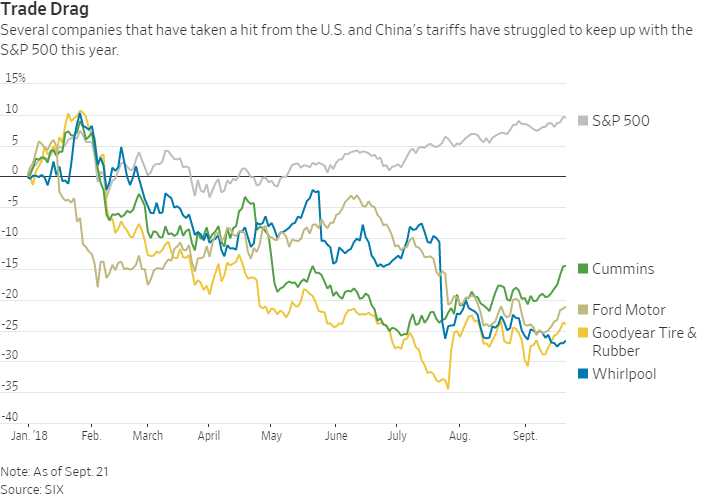 Move along folks, nothing to see here.

Despite a run of bad news over the weekend, so far, the market indexes seem unphased by negative news reports.  Of course it is the last week of the quarter and windows need to be dressed so we'll see what happens when October rolls in, along with Q3 earnings, when we may begin to see some companies begin to choke on higher wages and trade concerns.  As noted in the Wall Street Journal, Industrial and Material stocks are in their own private bear market yet no one is taking it seriously at all.

“There’s a number of money managers who’ve been hesitant to be involved with the [companies] that are going to be potentially affected by the tariffs, whether they’ll be able to export fewer goods or be buying less from China,” said Mark Grant, managing director and chief global strategist at B. Riley FBR Inc.

As I noted last week, China's Shanghai Composite is down 20% for the year and would likely have been down more today as China withdrew from trade negotiations over the weekend but that market is closed today for a holiday.  THESE ARE THE SAME KIND OF THINGS PEOPLE IGNORED IN 2007/8! Analysts caution that while investors have been pricing the risk of a trade war into shares of manufacturers, mining firms, home builders and others, they mostly have ignored the glaring risks associated with major tech companies, such as potential punitive measures that could affect Apple’s manufacturing in China or cost increases that could hurt Amazon’s e-commerce sales. That puts the S&P 500’s narrow leadership at risk of a sharp pullback if trade tensions reach a boiling point, similar to the swift correction that stocks suffered in February on worries about a potential pickup in inflation.

Last night, China cancelled this week's trade negotiations with the Trump Administration and no further talks are scheduled as the US insisted on moving forward with $200Bn in additional tariffs that take effect today.  That makes it very doubtful there will be any resolution before the election as China has no reason not to wait and see if they will have more a more reasonable…
END_OF_DOCUMENT_TOKEN_TO_BE_REPLACED