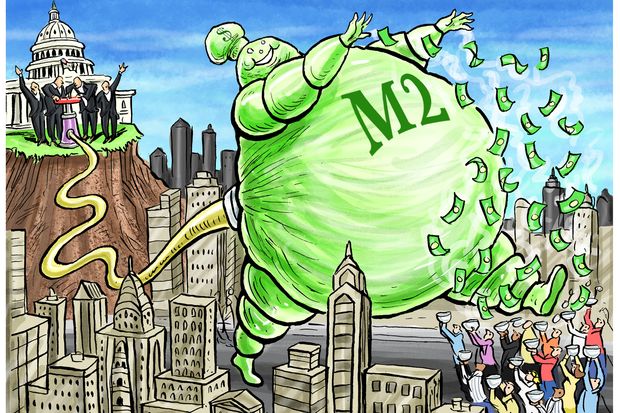 That's how much the M2 Money Supply has grown (26%) in the past 12 months (vs around 5% in a typical year) and it's going to grow another $4Tn this year as the Fed continues their easing policy.  This is the biggest growth since 1943, when war-time Money Printing was all the rage.  The looming danger for the economy isn’t only that the monetary printing presses have been in overdrive since the pandemic began, but also that they are already set for the same in 2021. A monetary surge for this year is locked in.

This is like giving kids an extra piece of candy the day after Halloween – it doesn't change anything, you're not going to get much of a reaction and the effort is probably wasted….

It’s worth tallying the list of policy measures that got us where we are. The first and largest source of M2 growth in 2020 was the Fed’s purchases of Treasurys and mortgage-backed securities. When the Fed buys such securities from nonbanks, which is its normal practice, it gives the seller a check or payment, credited to the seller’s bank deposit account. This increases M2. Since March 2020, the Fed’s holdings of Treasurys and mortgage-backed securities have increased by almost $3 trillion. M2 has increased by roughly the same amount.

The second largest source of M2 growth has been commercial bank purchases of short-term Treasurys and other debt securities, including mortgage-backed ones. These transactions create deposits in the same way as new loans do, with the deposit account of the seller or borrower being credited. Since the start of the pandemic last year, the increase in banks’ holdings of these assets has added almost $1 trillion to deposits and, therefore, to M2.

The U.S. money explosion isn’t over. Bank reserves, currently $3.2 trillion, will increase by about $1.4 trillion this year simply from Fed purchases of Treasurys and mortgage-backed securities at a promised $120 billion a month. In addition, the Treasury indicated in its February Refunding Statement that it will run down its Treasury General Account at the Fed by about $820 billion this year. This money will be spent through federal fiscal programs. These expenditures…
END_OF_DOCUMENT_TOKEN_TO_BE_REPLACED

PhilStockWorld February Portfolio Review – Part 2 Toppy Tuesday – What More Can Powell Say or Do at this Point?
Scroll to top