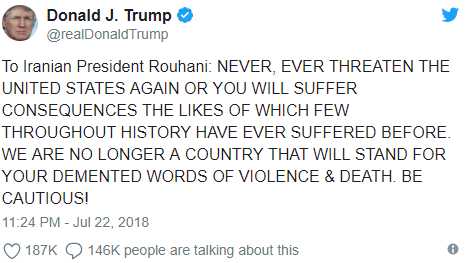 "Trump Threatens Iran in Tweet, Warning of Dire ‘Consequences’" is the headline in the Wall Street Journal this morning.  Apparently (and we don't know for sure what's in this guy's head, which is attached to the arm that's got a finger on the button), Trump was "responding" to a speech by Rouhani over the weekend that was the usual rhetoric in which Iran's President said: I guess we now know which path our President is going to choose!  Of course oil prices flew back up to $69 a barrel from lows of $65 last week after Trump announced he may open up the Strategic Petroluem Reserve to keep prices low.  People who have foreknowledge of Trump's announcements could make Billions of Dollars betting on the price swings very much the way Vladimir Putin and his Russian cronies did when they manipulated oil prices.  I wonder where Trump would have gotten that idea?

Mr. Trump’s warning to Iran came hours after a speech by Secretary of State Mike Pompeo that was harshly critical of Iran’s leadership. Mr. Pompeo accused Iran’s leadership of widespread corruption at the expense of its citizens’ welfare.  “Governments around the world worry that confronting the Islamic Republic harms the cause of moderates, but these so-called moderates within the regime are still violent Islamic revolutionaries with an anti-America, anti-West agenda.” Well, if they didn't have one before, they sure have one now, especially after Trump unilaterally withdrew from the Iran Nuclear Treaty of 2015 that was negotiated over many years by Obama and Trump is not only imposing sacntions against Iran for no apparent reason but is also trying to force our allies to go along with the sancitions.  These are all moves that have driven the price of oil from $45 to 75 (66.6%) since Trump has been in office – maybe that's a sign?

TGIF – Stop The Week, We Want to Get Off Trillion Dollar Tuesday – Amazon, Alphabet, Apple and Google Race to the Market...
Scroll to top