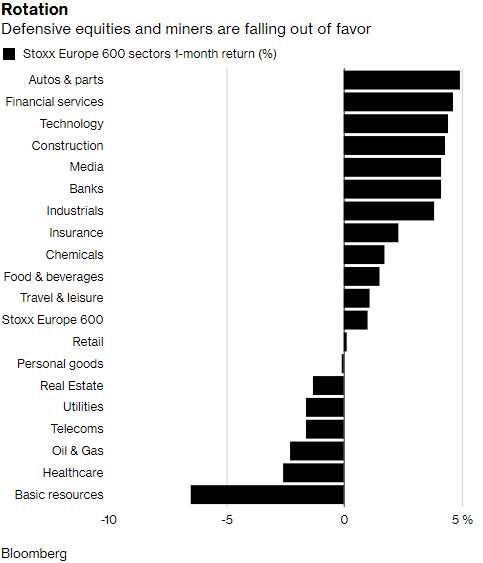 Though it may seem like we're treading water, we're actually rotating our sectors.

3 weeks into Q1 earnings that have generally been strong the "safety" sectors have fallen back out of favor and the usual suspects (Tech, Finance) are back in favor, joined by Contstruction, Media and Industrials, which have come back in favor.  With the cyclicals moving up, it's odd that materials are not and, if the rally is real – that's a sector we'll expect to see improvement in.

To some extent, I'm worried that we are confusing increased efficiency for a good economy.  Automation and AI are driving earnings gains while sectors that actually serve the consumers like Travel,  Retail, Personal Goods, Real Estate, Utilities, Telcos – even Healthcare – are falling off because, as I noted earlier in the week, consumers have less and less disposable income.

You can have an earnings recovery without actually selling more stuff and that's what's going on now but, ultimately, you can't grow if you don't sell more stuff and Trump's Tax Cuts have done nothing to improve the buying power of the consumers that ultimately drive this economy.  Sadly, as we may see today, you can have a nice economic recovery without having to hire people these days.

Woops – there goes another couple of million jobs!

That's how we're seeing all these companies, without the benefit of having more sales, dropping more and more money to the bottom line and we're only in the very early stage of this automation cycle – like the beginning of the Industrial Revolution – which led to World Wars 1…
END_OF_DOCUMENT_TOKEN_TO_BE_REPLACED