As noted in the Fed's Beige Book (which we discussed in Wednesday's Live Trading Webinar), low unemployment is restraining growth due to a lack of qualified applicants.  Low immigration isn't helping either – to the point of crops rotting in the fields due to lack of laborers.  The Fed is becoming very concerned about rising wage pressure, which can quickly eat into Corporate Profit Margins – especially when they are still having trouble pushing price increases through to the consumers. The ever-weakening Dollar means the workers have less buying power with the Dollar falling 6% since Trump took office (making America eh again) – effectively cutting the buying power of 160M workers by 6%, which is like losing 9.6M jobs yet today Trump will celebrate and take credit for 1M new jobs created under his regime – at the same 200,000/month pace we've been on for 5 years (thanks Obama).

What we really have is a net loss of 8.6M jobs worth of buying power and it's been great for Corporate Profits as companies get paid in weak Dollars (very good for S&P companies, who get half their revenues overseas) and pay their workers in weak Dollars, which greatly inflates their Net Income – for now.  Restaurants are one of the first industries feeling the pinch of diminishing buying power as traffic is down 2% overall, most notably on 433M less lunches taken. 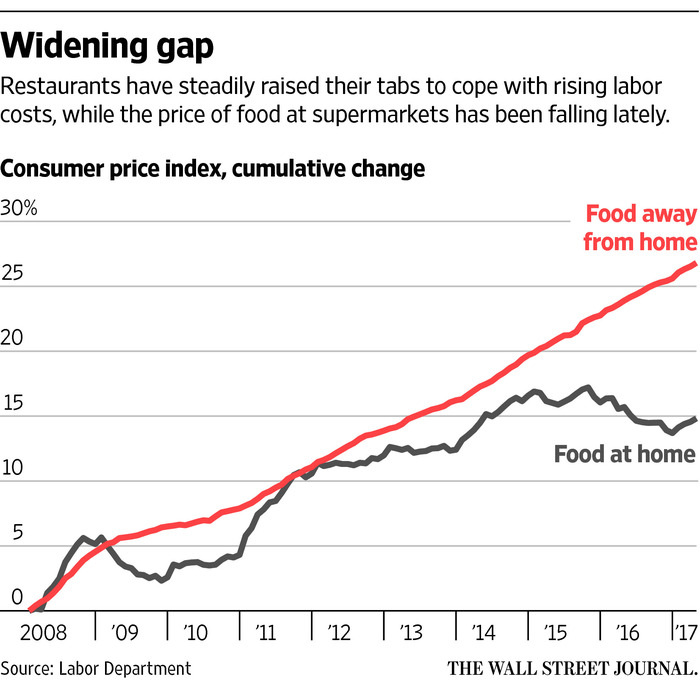 Restaurants are doing what every industry will have to do in a tight labor market, they are raising prices and HOPING not to lose too many customers as a trade-off.  Unfortunately for restaurants, food at home is getting cheaper at the same time – making the trade-up to a meal out a more and more expensive decision for consumers.

The pain is spreading to suppliers. Meat giant Tyson Foods Inc. recently said a 29% drop in quarterly earnings was due partly to the decline in restaurant traffic.  “Consumers are buying fresh foods, from supermarkets, and eating them at home as a replacement for eating out,” Tyson Chief Executive Tom Hayes said.

The average price of a restaurant lunch has risen 19.5% to $7.59 since the recession, as…
END_OF_DOCUMENT_TOKEN_TO_BE_REPLACED