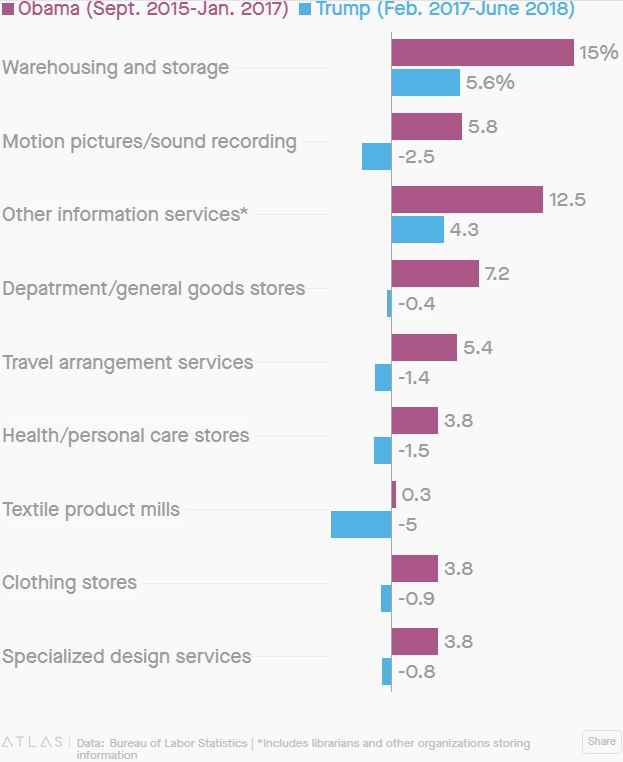 As we discussed last month, 200,000 jobs is not growth, that's just our population growth.  Job growth, in fact, has slowed markedly over the past 18 months and this chart shows you how far behind Obama's Trump's are falling – especially in the struggling Retail Sector, where jobs are trending negative over the previous period.

Obama is credited with a net gain of 11.6M jobs during his tenure but that includes 2009's 3.5M lost jobs detracting from the 15.1M jobs that were gained under 7 years of Obama budgets and also not counting the 8th Obama budget – the one Trump takes credit for in his first year for another 2.4M jobs gained.

Obviously, that's not happening but let's say that $666Bn of deficit was unavoidable and Trump spent just $333Bn extra Dollars to create jobs (wasn't that the point?).  Well, at $333Bn/2.4M it turns out Trump is spending $138,750 per job created and, as noted above, they are not really being created – we're just keeping pace with the population growth of 0.8%.

The rest of that $333Bn National Debt that Donald Trump is forcing your family to take on is going to pay for Tax cuts for Billionaires – like Donald Trump – sucker!  Notice even the GOP, who don't shy away from bullshitting when it suits their purposes, have even stopped saying the words "job creators" as it has, at this point, been exposed as the total farce that phrase always was.  I wonder what the BS will be for the next election?