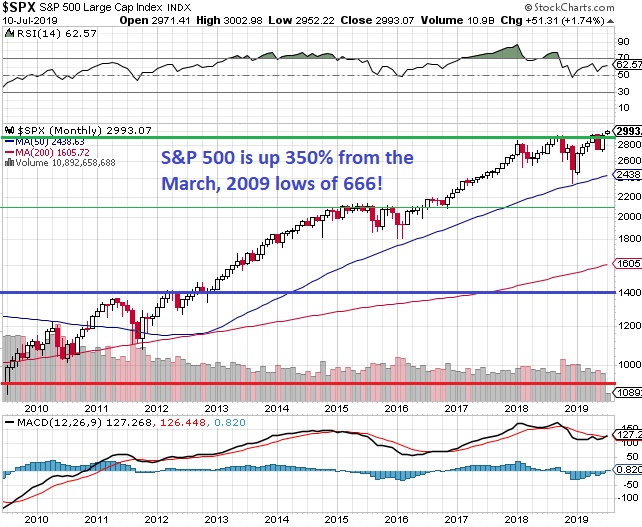 All the heavy lifting, from 666 to 2,500 (275%) was done under Obama's watch and the economy was doing so well that the Fed was tightening and reducting their balance sheet.  30 months into Trump's turn in office and the Fed is hitting the panic button again, reversing course and actually going back to cutting rates to help stabilize an economy ravaged by rampaging deficits, political instability and pointless trade wars.

And that's considered the "GOOD" news that traders are embracing from Powell's comments as he stretches to justify bowing to pressure from the President to lower rates despite all the prosperity the President claims we are enjoying.  Of course it makes no sense – but is that a reason not to pay all-time high prices for stocks?  $1Tn for Apple, $1Tn for Microsoft, $1Tn for Amazon… sure, why not?  After all, what's a Trillion anyway – we run up more than that in debt every 12 months now.

We're on a path towards making money meaningless so why not spend it on over-priced equities.  As you can see from the chart above, it's been a pretty much straight up 10-year run with only 6 noticeable corrections so once every 18 months we average a pullback on our 350% run.  No wonder so many people are trained to buy any dip – it's been a winning formula since Generation Y got out of college – they don't know any better. 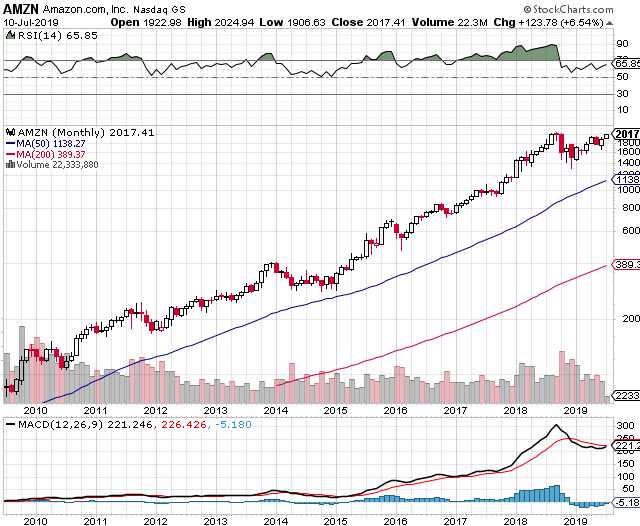 Ignorance can truly be bliss in a bull market as traders are content to ride stocks like Amazon to the moon while more cautious investors might have taken some off the table half a Trillion Dollars ago.  Just yesterday, AMZN gained 1.5% or $15Bn in market cap despite the fact that only $10Bn worth of shares…
END_OF_DOCUMENT_TOKEN_TO_BE_REPLACED