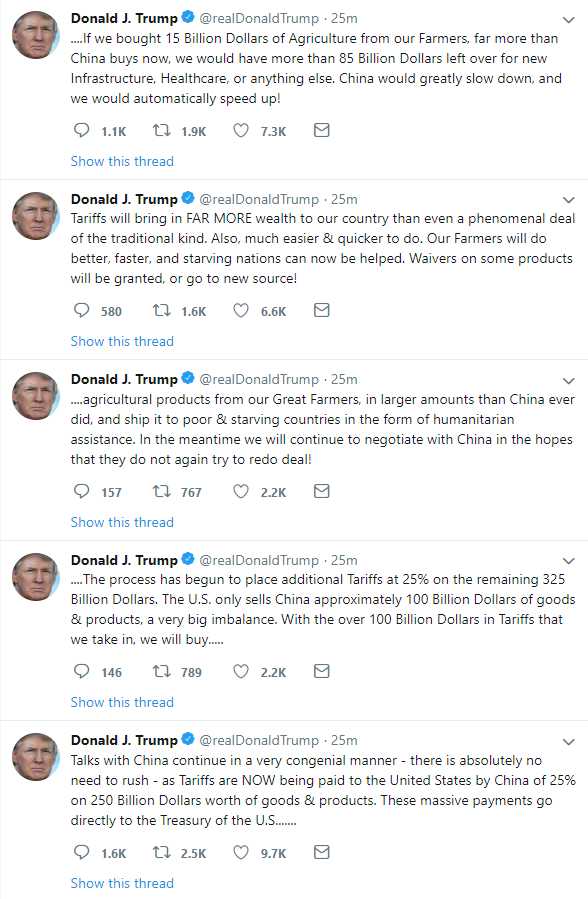 That's right, as we expected Team Trump has not been able to make a deal with China and, as of midnight, tariffs increased on $200Bn (not $250Bn) worth of Chinese goods from 10% to 25%, which isn't really that terrible ($30Bn) but President Crazy Train is also looking to add taxes to another $350Bn worth of goods but, to do that one (legally), the U.S. trade representative’s office would need to identify the goods, seek comments on its choices and hold hearings – so it's very possibly just an empty threat from the President and China knows it because they study US law a lot more closely than Trump and his advisers seem to.

So, in the grand scheme of things, $30Bn more tariffs isn't going to break anyone and the total revenues would be $50Bn (25% of $200Bn), not "over $100Bn" that Trump is fantasizing about and how pissed off do you think Puerto Rico is to have Trump BS'ing about sending humanitarian assistance to "poor and starving countries" when they've been waiting almost two years for something besides paper towels to clean up after their disastrous hurricane? Of course, those same levels will be in play again today but keep in mind we made the call at 11:58 for our Members – as the indexes were crossing back OVER the lines and momentum was on our side – don't try to be a hero and catch the index while it's moving against you – that can lead to big losses if your line doesn't hold.

In fact, later in the afternoon we analyzed the index moves and determined they were only making bounces off the 5% drop lines according to our fabulous 5% Rule™, which is not TA – just math.  Failing the bounce lines means it's more…
END_OF_DOCUMENT_TOKEN_TO_BE_REPLACED