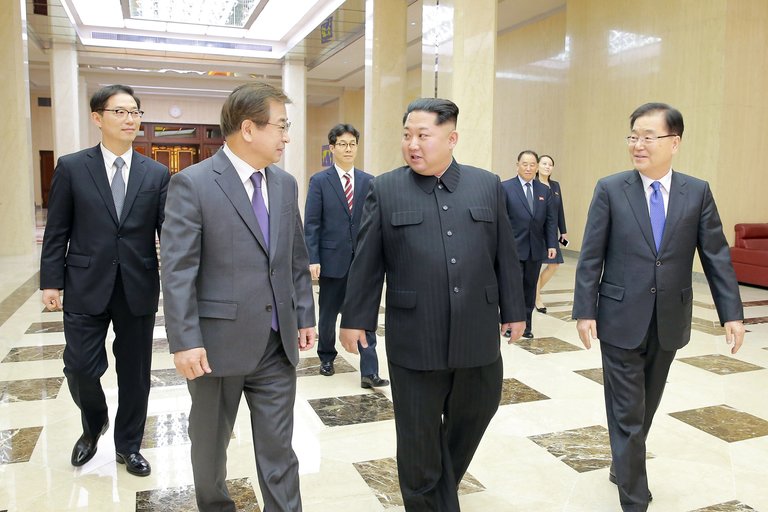 North Korea said they are willing to hold talks with the US about giving up nuclear weapons and "normalizing" relations with Washington (whatever normal is these days).  The two Koreas also agreed to hold a summit meeting between Mr. Kim and President Moon Jae-in of South Korea on the countries’ border in late April, Mr. Moon’s office said in a statement.

“The North Korean side clearly stated its willingness to denuclearize,” the statement said. “It made it clear that it would have no reason to keep nuclear weapons if the military threat to the North was eliminated and its security guaranteed.”

“The North expressed its willingness to hold a heartfelt dialogue with the United States on the issues of denuclearization and normalizing relations with the United States,” the statement said. “It made it clear that while dialogue is continuing, it will not attempt any strategic provocations, such as nuclear and ballistic missile tests.”

Between that news and the growing consensus that Trump's tariffs won't really affect much of the Global Trade (the EU retailiated with just $3.5Bn in sanctions against US goods) the markets are sharply higher yet again and, once again we'll check in on the S&P's bounce lines to answer the eternal question: "Are we there yet?"  Here's the line we were looking for a month ago:

And here's where we are today:

I would be more excited but last Monday we had a fake 80-point gain on low volume and yesterday we had an 80-point move on low volume – so it remains to be seen if it actually holds up for more than a day.  Also, last Monday was far more impressive than where we are now and we fell 140 (5%) points by Thursday – so let's not get carried away by getting halfway back to where we were, OK?

There's not too much market-moving news, we had Powell's testimony last week and then the Tariff thing and now we have possible peaceful moves in North Korea but were we really…
END_OF_DOCUMENT_TOKEN_TO_BE_REPLACED