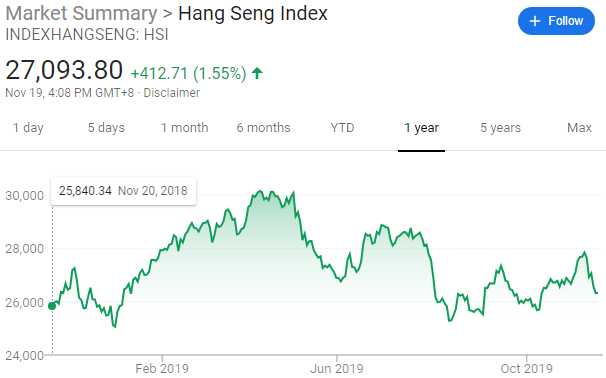 What are they so afraid of?

I know I sound like an old curmudgeon, always looking at the downside of all these rallies but doesn't it seem odd that our Governments seem to find it necessary to add various forms of stimulus to economies they keep telling us are great – again?  This week it's China, with the PBOC cutting rates on its Repos for the first time since October of 2015 – sending the Shenzhen Index up 1.8% overnight and even Hong Kong's Hang Seng Index rose 1.5% to the sound of gunfire on the streets exchanged between students and the police.

“Having had a day to digest that news, investors seem to believe that the rate cut is indeed a sign of better liquidity on the way, lifting more sentiment-driven stocks in Shenzhen,“ said Bill Chen, CIO at Shenzhen Valley Asset Management Co.  As to the Hang Seng – it was in danger of failing 26,000 and turning negative for the year and China doesn't want it to look like the protests are affecting their business – even though they clearly are.

In fact, the headline in the South China Morning Post is:  "Hong Kong's Stock Market Bulls Shrug Aside City's Street Protests" saying: "42% investors surveyed by Bright Smart Securities expect the Hang Seng Index to rise 5% next year, while only 6% see it declining from the current level."

Apparently, 52% of the investors were hiding from the Government surveyors…  “The protests may have led Hong Kong’s economy into a technical recession in the third quarter, but the survey shows Hong Kong investors are cautiously optimistic about the stock market next year,” said Edmond Hui, chief executive of Bright Smart Securities.