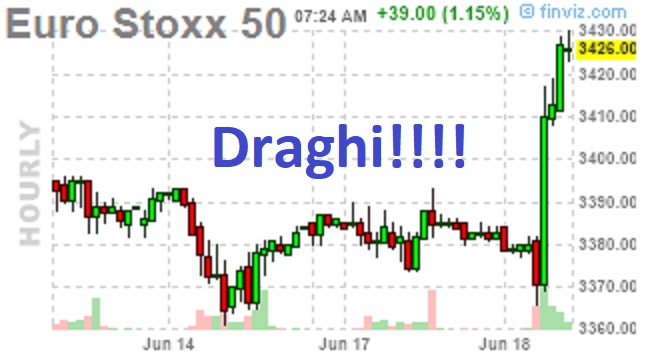 This is why Goldman Sachs put Mario Draghi in charge of the European Central Bank (ECB) – exactly for a moment like this when they need to boost the US markets and this statement couldn't have been timed better – just ahead of the start of the Federal Reserve's 2-day meeting that will lead to a policy announcement tomorrow at 2pm.  Draghi said the ECB is "ready to launch another round of stimulus" as inflation remains below targets.

That target is, of course, 2% and if we were over 2%, they would be raising rates to fight it so the entire process is ridiculous but the most ridiculous thing is basing your entire monetary policy on a singly, unreliable data-point.  Of course, the inflation target is just an excuse because, over or under, we've seen Central Banksters call it "transitory" – meaning they will totally ingnore it when it suits them.  In this case – the Masters want to see all-time highs in the markets – so low inflation is our #1 excuse to jack up the markets.

Low rates aren't free – taxpayers subsidize the wealthy by artificially reducting rates through Government Debt (where the wealthy lend the Government money to subsidize their rate cuts) and we are being forced to do this (year 10) in order to force the prices that we pay to go unnaturally higher (in order to increase Corporate Profits so the wealthy can have more money).  Are you beginning to see a pattern here?  It didn't take long for the Oligarch-In-Chief to weigh in on the subject:

Monetary Monday – Market on Pause Ahead of the Fed Record High Wednesday – Will the Fed Pop Us or Drop Us?
Scroll to top