That's right, the Dow blasted 1% higher this morning to hit 26,000 and the S&P 500 hit 2,800 and the Nasdaq 100 hit 6,800 and the Russell hit 1,600 all record highs ahead of the Government shut-down on Friday (not really, they will extend it again).  Meanwhile, this puts Donald Trump only 12% behind Obama for first-year market rallies and he only had to promise a $1.5Tn tax cut to get it.  George Bush I also beat Trump – and that guy wasn't even trying! Notice the Clinton Rally lasted 4,494 days and was much, much bigger (582%) than our rally (301%) and yes, it was pure lunacy at the end of the dot.com boom but this is the no tax boom and crypto-idiocy boom and 2,000 lie boom – all rolled into one.  Sure, in a few years, we'll look back at this rally and say "What were those idiots thinking?" and we'll forget "those idiots" were us and yes, I'm including myself because, despite warning you to be cautious, we put 20% of our CASH!!! back to work this month in our brand new Member Portfolios. 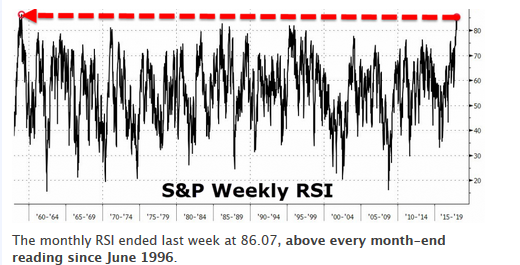 FOMO (Fear of Missing Out) is what drives the markets and, if we are on the way to a Clintonesque 100% additional gain from here (Dow 50,000?), then we'd feel like real idiots missing out on that rally, even if there is "no inflation" – according to the Fed.  As you can see from the Relative Strength Indicator – since 1960, we have never been this "strong" in the market and forget the fact that all those peaks ended…
END_OF_DOCUMENT_TOKEN_TO_BE_REPLACED

Fantastic Friday – Greetings from the Top to all you S-Hole Countries! Which Way Wednesday – Will the Wild Ride Continue?
Scroll to top